Creating the Scent of a Sense 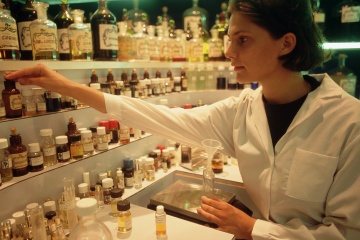 Creating a perfume is a process of trial and error that can take weeks, months or years. Perfumer Ruth Mastenbroek spent three years creating her self-named signature fragrance (2010). Christopher Brosius spent five years creating his award-winning Snow (2000), which smells like snow [source: Gray]. But they were creating for their own lines; when creating for a client, a month or so is more common [source: Bradley].

A perfumer typically begins with an olfactory goal in mind, and the process starts with selecting essential oils for the base notes [source: Perfumer's Apprentice]. Notes are individual scents. When various notes are combined, they form a new scent called an accord. A base accord, middle accord and top accord make up a perfume.

To create a base accord, a drop of each selected essential oil is applied to the end of a separate test strip (or "scent strip"), a long, thin piece of blotter paper with room on one end for notes. Holding those test strips together, the perfumer smells the resulting accord. If it works, voila. Base accord.

When the perfumer is holding an array of scent strips that emits the perfect base accord, the process starts anew for the middle notes, eventually resulting in the middle accord. Once the middle accord is perfected, that set of strips is paired with the strips of the base accord, and experimenting begins again, this time making adjustments based on the interaction between the base and middle accords. And then again with top notes – creating the top accord, joining that accord with the middle and base accords, and experimenting until the combination of the three, which will be the perfume, is just right [source: Perfumer's Apprentice].

Achieving this result can take hundreds of trials [source: Academic Invest]. But for those with the dedication to break into the world of commercial perfumery – there are apparently more working astronauts than working perfumers -- it's a labor of love [source: BBC].