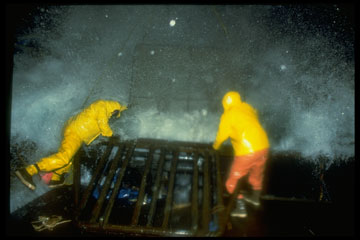 Imagine you're aboard a 128-foot (39-meter) steel fishing vessel bobbing in the frigid waters of Alaska's Bering Sea. Despite sub-freezing temperatures, 30-foot (9-meter) waves, 60-knot winds, and darkness, you're expected to don your wet-weather gear and man the icy deck, where you manage dozens of 700-pound (318-kilogram) steel traps, or "pots." As a rigging cable whips by and nearly knocks you off your feet, you're reminded that about a dozen people in your profession die every year. These conditions may sound like a nightmare, but they're a reality for the crews of Alaska's 80 crab-fishing boats. They accept the risks because the reward can be sizable -- in a good year, deckhands can make $100,000 for just a couple months of work!

The unpredictable weather off of Alaska's coast is the greatest danger that crab fishermen face. The most lucrative crab seasons occur in the fall and winter, when the storms are especially fierce and the cold is especially brutal. At temperatures below 20 degrees Fahrenheit (minus 7 degrees Celsius), spray from the choppy seas freezes on every surface of the boat, making the strenuous work of crab fishing even more difficult. The ice also threatens the stability of the boat, adding up to 45 tons of weight to the pots alone. Because of these dangers, crew members are constantly using sledgehammers to break the frozen spray off of the boat during cold weather.

In case laboring on the rocking, icy deck of a crab fishing vessel isn't dangerous enough, deckhands must often work long, exhausting shifts. With seasons often lasting less than four weeks, the pressure to meet the boat's catch quota is intense; captains sometimes push their crews to work 40 out of every 50 hours when the fishing is especially good. The resulting fatigue can cause workers to become careless and be pulled overboard by a loose rope, mangled by heavy machinery, or crushed by swinging crab traps.

Between 2000 and 2009, an average of 12 crab fisherman died each year [source: CDC]. Read on to see if those filming crab fishing have fared any better.

Like crab fishing, filming crab fishing has proven to be quite profitable, as the Discovery Channel show "Deadliest Catch" draws 3 million weekly viewers in the United States and is now broadcast in 150 countries. However, the show poses many special challenges for the camera crew, which must operate during the same harsh weather and around the same hazardous equipment as the fishermen.

Filming crab fishing off of Alaska's coast poses a unique set of challenges that demands an experienced team of cameramen and producers both on land and at sea. A production team is based in Unalaska to edit tape and piece together storylines, while helicopters and boats take footage of the ships as they leave the harbor. It is the two-person cameraman/producer team placed on each boat, however, that captures most of the footage and faces most of the danger.

The quandary faced by the film crew is that the harsh conditions that make Alaskan crab fishing so interesting to watch also make it difficult and dangerous to film. Moisture in the air and freezing temperatures wreak havoc on the electrical equipment. Despite the best attempts to waterproof the Sony HDV cameras, salty ocean spray finds its way into parts that conduct electricity, causing corrosion. By the end of the season, only a handful of the 50 or so cameras the crew started with still work. Even when the film team manages to stay dry, condensation often forms on the lens and freezes, making it very difficult to get a clear shot. Icy conditions coupled with the rocking of the boat also represent a challenge for the crew, who must look through the camera to see what they are filming. LCD viewing screens make this easier and safer, but this precaution hasn't prevented cameramen from breaking ribs and spraining ankles. Those who film crab fishing also face exhaustion. Cameramen may film up to 40 hours at a time and will often get up before and go to sleep after the crew in order to film their entire workday.

Which, then, is more dangerous: crab fishing or filming crab fishing? That's difficult to say, since no cameraman has died on the job, but there's no question that each activity involves a king-crab-sized amount of danger.

Still awed by the dangers of crab fishing? Click over to the next page for more information.

Every year, Forbes Magazine releases a list of America's most dangerous jobs based on the Bureau of Labor Statistics' fatal injury rate for each profession. Here are the top 10 for 2011:

9. Drivers, including salesmen and truck operators

10. Construction laborers (not including equipment operators)