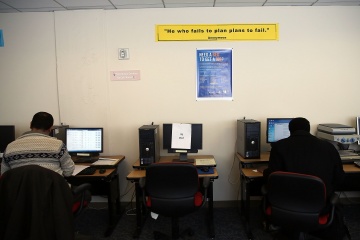 The true measure of Americans' misery goes beyond how many people are lined up at the unemployment office.
Spencer Platt/Getty Images

Critics of the misery indexes discussed so far opine that the numbers rendered are deeply flawed. For starters, they say, the two main sources, standard unemployment statistics and the annual consumer price index (for inflation) are considered inaccurate by some. Unemployment stats, for instance, don't typically include people who are working part-time or, for that matter, those who have abandoned the job hunt. The consumer price index, for its part, might not give adequate weight to essentials like fuel and food.

But say you do give gas prices their due — that has no bearing on people who don't have cars. And when we're talking about misery, shouldn't we also factor in things like house foreclosures, evictions, bankruptcy, loan defaults and loss of health coverage?

Accordingly, efforts have been made to create yet more accurate measurements of population-wide misery. In 2009, for instance, The Huffington Post created a metric it calls the Real Misery Index.

Traditionally, the various misery indexes have used something called U3 unemployment statistics. The U.S. Bureau of Labor Statistics (BLS) actually has six different statistical measurements of unemployment (U1 through U6). U3 is the official one you hear in news reports, but it only measures the number of people who are officially unemployed. U4, U5 and U6 increasingly broaden the scope of who is considered truly unemployed. U6, the broadest of the metrics, includes people who've become so discouraged they've given up trying to find work, as well as those who are employed part-time because there's no full-time work available [source: Investopedia].

HuffPost's Real Misery Index uses the U6 statistic. It then averages out seven other stats: the inflation rate of food/drink, fuel and healthcare; the rate of credit card delinquency; the cost of housing; how many people are using food stamps; and home equity loan deficiencies. With the average of those seven numbers added to the U6 stat, the Real Misery Index had a wildly different result from traditional indices. The Okun Misery Index for 2009 was 8.1. But HuffPost's Real Misery Index registered a stunning 29.9 [source: Parks]. By March 2010 it was all the way up to 33. Happily, that was the peak. That summer, it dropped back down to 24, hinting at the slow but steady recovery to come. Too bad the Post hasn't kept up their index; it would be interesting to see where we stand now.

As of March 2017, the basic Misery Index in the U.S. was 6.88. That's a simple addition of the 4.5 percent unemployment rate and the 2.38 percent inflation rate. That's a very low level of misery by historical standards, comparing well with the Eisenhower years [source: U.S. Misery Index].

I'm old enough to remember the 70s very well. What I remember is a lot of long feathered hair, big old rusty cars, hand-me-down bell-bottoms, super-wide collars and a general atmosphere of DIY scrappiness. But what I don't recall is any overall sense of misery. When the 80s came, suddenly the cars were smaller and shinier, everybody's hair was shorter, collars were narrow, pant-legs tapered and people bought stuff new instead of making it themselves. Were we better off? I'm not so sure.