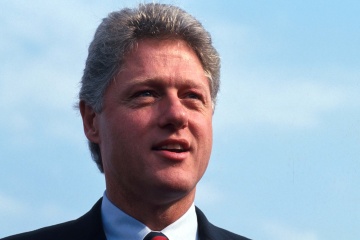 According to economist Robert Barro's revised Misery Index, presidents Ronald Reagan and Bill Clinton (seen here on the campaign trail in 1992) oversaw the lowest misery rates during their time in the Oval Office.
Cynthia Johnson/Liaison/Getty Images

In his 1996 book, "Getting It Right: Markets and Choices in a Free Society," Harvard professor Robert Barro revised Okun's Misery Index by adding a few extra parameters. Arguing that Okun's index provided a glimpse of the economy but didn't reveal whether conditions were improving or worsening, Barro focused on creating an index that would measure performance over a president's term in office.

To do this, he used four measurements. First he took the inflation rate during the last year of a president's term and compared it to the average inflation rate over the course of the subsequent president's entire time in office. Second, he did the same thing with the rate of unemployment. Third, he added in the changes in the 30-year government bond yield over a presidency and, finally, he considered the difference between the long-term rate of GDP growth and the real rate of growth over the president's term in office.

Instead of a series of snapshots, Barro was able to create a continuous record of economic performance, term by term. The POTUSes (POTI?) who came out on top in the revised index were Reagan and Clinton [source: Hanke].

Roughly a decade later, Steve Hanke took Barro's index a step further. To the measurements of inflation and unemployment, he added interest rates and subtracted annual percentage changes in GDP [source: InflationData.com]. He then used the new index to gauge economic performance outside the U.S.

This isn't always easy because some countries, such as Venezuela, use price controls to keep inflation in check. Hanke argues that the resulting official inflation rates are inaccurate, and he uses some creative methods (such as identifying black-market exchange rates) to calculate what he considers to be the true rate of inflation. In Hanke's 2014 index, Venezuela topped the gloominess chart at 79.4.

With a whopper of a number like that, the U.S.'s 11.0 looked pretty good, but it wasn't much to boast about considering that 18 countries were less miserable, including the usual suspects like Canada, Germany and Norway, but also Latvia, Panama and Thailand. And while South Korea, Singapore and Taiwan were in the top (or rather bottom) five, none of them could touch Japan, which, at 5.41, barely registered any misery at all [source: Hanke].