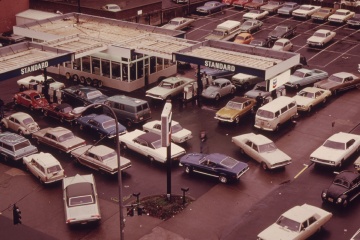 As you'd imagine, the gas crisis in the U.S. during the 1970s did nothing to keep the Misery Index low.
Smith Collection/Gado/Getty Images

Okun served as chairman of the CEA during Lyndon Johnson's presidency and then shifted over to the Brookings Institution in the 1970s. By then, something unprecedented had happened with the economy.

In 1973, Egypt and Syria led a coalition of Arab states in an invasion of Israeli territory to gain back the Sinai and Golan Heights. When the U.S. waded into the conflict by supplying arms to the Israeli forces, the Arab coalition retaliated by imposing an embargo on oil exports. The embargo included the U.S. and any other countries that supported Israel [source: U.S. Dept. of State].

At the time, the U.S. was highly dependent on foreign oil — abruptly shutting the taps was an enormous shock to the system. The resulting fuel shortages caused oil prices to increase by 37 percent [source: Resnick]. Soon cars were bumper to bumper in lines to gas up.

When demand outstrips supply you get inflation, and that's exactly what happened. What also happened, to everybody's consternation, was a rise in unemployment.

This was weird because unemployment and inflation were once deemed mutually exclusive. The phenomenon earned the name "stagflation," and it turned out to be a very thorny problem to solve. Any effort to reduce inflation would likely exacerbate unemployment.

It took years for the economy to emerge from the mess, and while it did, American society wrestled with a concept it hadn't been forced to confront since the Great Depression — widespread financial distress.

Misery was everywhere. And inflation and unemployment were the sources of collective anxiety when Arthur Okun was tinkering with a new method for measuring the state of an economy. Given the context, it's hardly surprising then that the Misery Index is calculated very simply by adding the yearly rate of inflation to the unemployment rate [source: InflationData].