Is the Meatball Ikea's Secret Weapon? (And Other Surprising Facts)

Browse the article Is the Meatball Ikea's Secret Weapon? (And Other Surprising Facts) 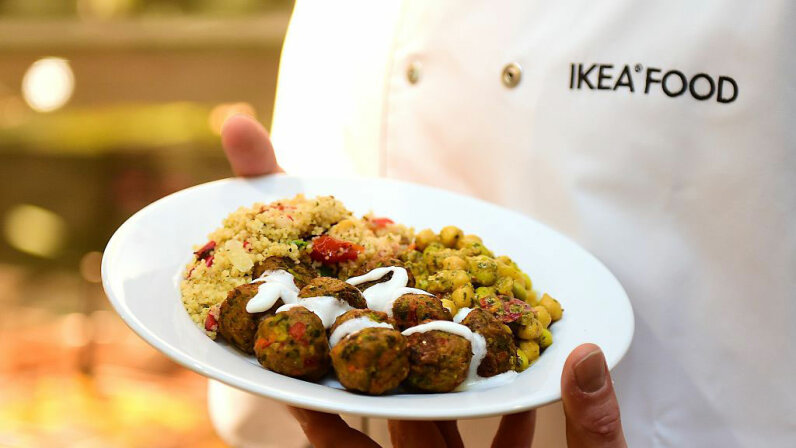 An Ikea employee displays the the company's vegetarian meatballs, during a worldwide launch at Ikea Anderlecht in Belgium, on April 8, 2015. EMMANUEL DUNAND/AFP/Getty Images

The cultural phenomenon that is Ikea can hardly be thought of as just another furniture store. In fact, furniture is just one part of the equation that draws people from far and wide to shop, at the uber-popular retailer. In this episode of Part-Time Genius, "Why is IKEA obsessed with building a better meatball?", hosts Will Pearson and Mangesh (Mango) Hattikudur share little-known tidbits of Ikea trivia bound to surprise even the most enthusiastic patron.

1. The Meatballs Are So Cheap They'll Change Your Mind-set.

Those meatballs are more than just yummy in your tummy. In fact, they, along with the other super-cheap food options available in the café, are "framing devices" to clue you in on the store's value potential. "So, shoppers think, 'If Ikea's giving me this hot dog at cost, they've gotta be doing the same for the furniture,'" Mango says. The cafes are also great for giving indecisive couples time to figure out what to get. And since no one wants to shop hungry, having food on the spot gives you one less reason to leave the vast store. Meatballs are a metaphor for the Ikea philosophy: The company consistently tweaks its best-selling products to make them cheaper. If they can't do that, they often kill off the products. (Meatballs are in no danger there.)

Ikea stores are designed to have shoppers walk through the entire space from start to check-out. "The whole store is intended to be this lazy river that pulls you along and every 50 feet or so there's a curve in the path because there's always supposed to be something enticing hiding right around the corner," Will notes. If you're crunched for time and just looking to scope out a couple of items, this can obviously be a deterrent. Thankfully, there are hidden shortcuts that allow you to skip through sections, a feature that Mango likens to one of those level-skipping pipes in Super Mario Bros. "Those passageways are mostly there to be helpful for workers, but they're also there in case of emergencies, and as long as the door doesn't say 'Employees Only,' Ikea won't really hassle you about poking around," Mango says.

3. Stores Have an "Open the Wallet" Section.

Shoppers might head to Ikea for a bookcase or couch, but they rarely leave with just those purchases. In fact, impulse buys are a major component of Ikea's success, and the last section of the store before checkout is known as the "Open the Wallet" section. "That's where all the things you need but would never come to Ikea specifically for, they're waiting for you right there," says Will -- like a plastic picnic plate. "It's at such steep discounts that you just can't resist," he adds.

A thousand jokes have been launched about the difficulties of putting together Ikea furniture. But those flat pack boxes are partly why the company is so profitable. Ikea didn't always have them. Back in the 1950s, Gillis Lundgren, an industrial designer who worked at the company, was trying to send a leaf-shaped table to a photo shoot. It wouldn't fit in his car so he took off the legs and inspiration hit: Why not make all the furniture self-assembled? Those flat pack boxes (with little wasted air inside) do a lot for the bottom line. They transfer cost of assembly to buyer. They allow Ikea to keep a lot more furniture in stock, and they make this furniture much easier to transport. Ikea can ship 10 times more bookcases or desks as the competition for the same spend on gas, notes Will. Not to mention, one study showed you place a disproportionately higher value on furniture you've assembled yourself.

5. The Brand Is Way, Way Bigger Than You Thought.

Ikea uses a whopping 1 percent of the world's wood to make its furniture, and 626 million people around the world "became environmentalists" when Ikea stopped carrying incandescent light bulbs. The store even helps to increase Europe's population. "People always mention how one out of every 10 Europeans was conceived on an Ikea bed," Will says. Indeed, Mango notes that Ikea beds have been referred to as the "literal cradle of humanity."

To learn more about Ikea — including its secretive founder Ingvar Kamprad — download "Why is IKEA obsessed with building a better meatball?".

Now That's Cool
You don't even have to be physically in an Ikea to enjoy their meatballs. Buy them frozen, then try out this smorgasbord of recipes.