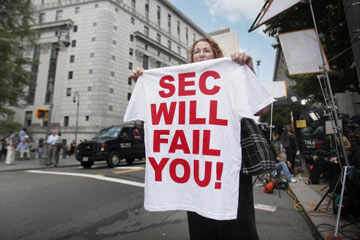 Faith in the SEC's ability to catch crooked business transactions isn't full among all people in the United States.
Spencer Platt/Getty Images

You may have picked up on the basis of the SEC's regulations on insider trading -- they're based on time rather than intent. It's hard to prove that an inside trader intended to use privileged information for personal gain; it's much easier to pin down whether a person traded with material knowledge before that information went public. If an executive's company compiles its quarterly earnings results at time point A and it publicly issues the earnings report at time point B, any trades made by the executive within that time frame are probably illegal and subject to investigation by the SEC.

To protect executives and entry level employees alike from investigation by the SEC, some corporations have compliance officers to observe the Sarbanes-Oxley Act of 2002, legislation that arose from the Enron scandal. One section of this act creates blackout windows; during these windows, all trading of company stock is prohibited. These windows generally surround major announcements, like earnings reports, decisions on bankruptcy and mergers and acquisitions.

Catching an insider involved in illegal trading has grown increasingly sophisticated in the 21st century. In decades past, the SEC relied on tips and human data analysis to catch insider trading. An executive is required to file a report on all company stock trades, but what if that executive fails to follow that requirement? With thousands of publicly traded companies in the United States and a ratio of less than one employee per company in the entire SEC, the Commission has historically had trouble catching insider trading violations. When you take into account all of the investment banks, accounting firms and the circles of friends, families, executives and employees at each company, it becomes clear that regulating trade is a Herculean task for the SEC. The threat of a random audit of executives' trades and a standing offer of rewards for whistleblowers are pretty much the only tools the SEC has had to keep traders honest.

With the advent of the Internet and fast computing, however, the SEC can cast a wider net to catch illegal inside traders. The use of computers to analyze trading activity in relation to major events like earning reports and mergers is called complex events processing. The results have been self-evident: From April 2006 to August 2007, the SEC filed more than a dozen insider trading lawsuits -- more than it filed throughout the entirety of the 1990s [source: Rodier].