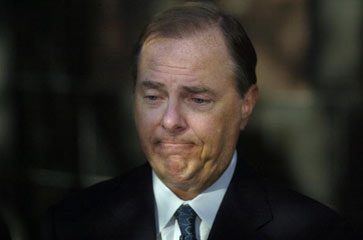 U.S. federal inmate number 29296-179 was once a very rich man. The prisoner, known to the world outside the Englewood low-security prison in Littleton, Colo., as Jeffrey Skilling, once had a net worth of around $100 million [source: Ahrens]. He served as CEO of the seventh-largest corporation in the United States [source: Ackman]. These days, still in the early years of his 24-year prison sentence, Skilling makes about one dollar an hour for menial labor like washing dishes in the prison cafeteria.

Skilling's downgrade from CEO to inmate was the result of his role as the mastermind of the largest corporate financial scandal in the history of the United States. (Despite convictions on 19 insider trading, conspiracy and fraud charges, Skilling maintains his innocence.) Skilling and his mentor, company founder Kenneth Lay, committed massive fraud against the shareholders of the Texas-based energy giant Enron.

The conspiracy was a sophisticated one; it included fraudulent accounting practices (the result of a dark alliance between the company and its independent auditors), which inflated the company's earnings and, hence, the share prices of Enron stock. Although many Enron executives, including Skilling and Lay, were fully aware of the company's financial troubles, this information was skillfully hidden by the earnings reports the company released. Enron encouraged its employees to buy stock in the company.

Just before news of the company's dire financial straits began to trickle out, beginning in April 2001, several executives -- with knowledge that the company's stock would soon fall -- sold much of their stock before it plummeted. By selling their shares (Skilling made $67 million in artificially inflated Enron stock between 1998 and 2001) despite knowing that the company's share price was about to take a dive, 29 executives engaged in what is known as insider trading [source: Moore, et al].

The 21,000 employees of Enron lost both their jobs and their retirement savings; the average employee had 62 percent of his or her 401(k) tied up in Enron stock [source: Lindstrom]. Every lost job and every lost dollar was the result of fraudulent accounting. But it was the insider trading that enriched the finances of the same executives who defrauded investors and employees alike that raised the collective ire of the media and the public.

What precisely is insider trading and why is it viewed as such a violation of the public trust?