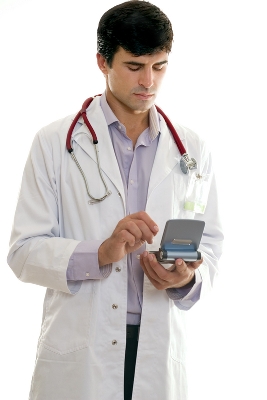 Information technology, or IT,  describes any technology that powers or enables the storage, processing and information flow within an organization. Anything involved with computers, software, networks, intranets, Web sites, servers, databases and telecommunications falls under the IT umbrella.

Most modern businesses depend heavily on information systems, from employee e-mail to database management to e-commerce Web sites. Hospitals have large patient databases to maintain. Universities have sprawling networks to administer. Even a small, home-based cookie business needs an order-tracking system. The Information Technology Association of America reports that 92 percent of IT professionals work for non-IT companies [source: Career Voyages].

Four of the ten most in-demand jobs right now in the United States are IT jobs. IT is everywhere. For that reason, IT professionals are in high demand. From 2004 to 2014, it's estimated that there will be 1.3 million  job openings in the IT sector. That's a 31 percent growth in the IT job market. And the average starting salary for graduating computer science, electrical engineering and information science majors is $50,000 [source: Career Voyages].

But who are these IT professionals, and what do they do?

In this HowStuffWorks article, we'll tackle the broad subject of IT by first looking at IT education -- the undergraduate, graduate and professional certification programs that train IT professionals. Then we'll look at the most popular IT job titles in detail, describing what that person does and how they do it. We'll finish with a look at salary expectations and the overall job outlook for IT careers.

Let's start with undergraduate IT programs and majors. 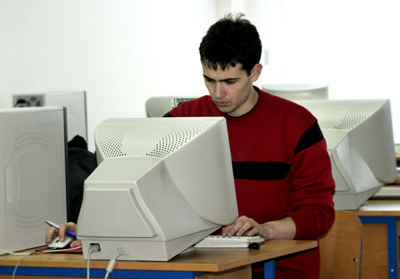 In 1994, a little over 20,000 bachelor's degrees were awarded from U.S. universities in the computer and information sciences field. In 2004, that number skyrocketed to 60,000 [source: Career Voyages]. Undergraduate IT degree programs and majors can be broken down into three general categories: information science, computer science and engineering. It should be noted, however, that each of these majors overlap with each other significantly, with some courses called computer science at one school and engineering at another.

Information science, alternately called information technology, is one of the broadest and most all-encompassing IT majors. Information science majors start from the beginning, learning the common programming languages and mathematical algorithms that make hardware and software tick. Then they learn about operating systems, databases, networks and security. Once they have an understanding of how these basic systems work, they learn how to analyze the needs of an organization or business to design the best and most secure information systems [source: Princeton Review].

Information science coursework could include:

Computer science coursework could include:

Computer engineering coursework could include:

Now let's take a look at some graduate IT programs. 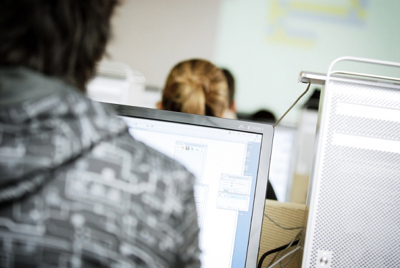 Graduate school is a time to focus your education on a particular field of study and explore it in-depth and hands-on. For students interested in graduate-level IT programs, the variety of available programs is as diverse as the IT profession itself.

If you pursue a master's degree or doctorate in information technology, computer science or computer engineering, you'll notice many of the course titles resemble those found at  undergraduate levels. The main difference between undergraduate and graduate programs in these areas is the depth of the coursework and the opportunities for original research.

For example, students of Carnegie Mellon University's graduate program in Electrical and Computer Engineering would take courses similar to those in undergraduate programs, but at a higher level, like:

That said, many IT graduate programs don't require students to have majored in engineering or computer science (although a strong math and science background is strongly recommended) [source: Princeton Review]. Even in graduate programs, there are courses meant to introduce students to important IT concepts. In the same Electrical and Computer Engineering program at Carnegie Mellon University, students can take these more general courses:

Since graduate school is a time to narrow down your studies, there are also many graduate IT programs geared at developing specific job-related skills. For example, students with an eye on being network and systems analysts or administrators can earn a master's degree in Information Networking (MSIN) or Information Security Technology and Management (MSISTM) [source: Information Networking Institute]. Students interested in a career as a tech business executive can get a master's or Ph.D. in Management Information Systems (MIS) [source: Princeton Review]. For die-hard coders, there are programs to earn a master's degree in software engineering.

Now let's look at yet another IT education option: professional certification programs. 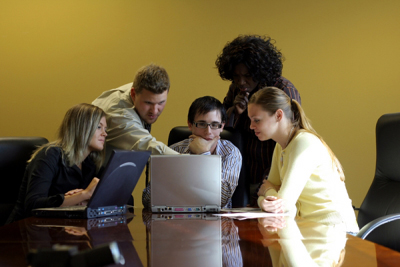 The IT job market is red hot, but vying for the best-paying, most rewarding jobs is still extremely competitive. Perhaps more than most careers, IT jobs require employees to be up on the latest technologies, trends and techniques. For many employers, it's not enough to graduate with a master's degree in computer science. IT professionals are expected to continuously build on their academic knowledge base through on-the-job learning, professional development courses and certification programs.

Since these certifications are designed for busy professionals, they only require a few courses and final exams. Each course runs only 3 to 5 days (or the equivalent amount of hours) and can be taken in the classroom, via distance-learning (live video broadcasts), e-learning (self-paced online instruction), CD-ROMs and even books.

In addition to Microsoft, Oracle and Cisco run two other popular professional certification programs. Oracle University classes are available in dozens of languages and offers certificates in all of the company's products, including the popular Oracle Database, Oracle E-Business Suite and the Siebel CRM tool. Cisco offers equivalent certifications in its areas of expertise, namely networking, network security, routing and switching, and VoIP.

These certification programs are popular for a reason. According to the Robert Half Technology Report, the top three IT skills most desired by employers in 2007 are:

Now that we have an idea about all of the IT education options available, let's look at some of the most popular IT careers. 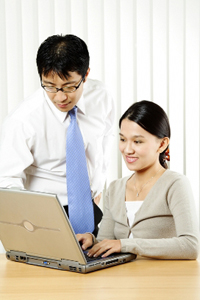 There are hundreds, if not thousands of IT job titles out there. Since we can't talk about all of them, we'll take a look at the six most popular IT career paths:

Analysts, also known as developers and architects, are the ones who come up with the specific IT plan for an organization [source: Bureau of Labor Statistics]. They either design information systems from the ground up or figure out what hardware and software upgrades will make the existing systems run better. Different analyst job titles are systems analyst, network analyst and database analyst. Analysts have to have strong communication skills to act as the middleman between management and the IT staff. They need to have both business savvy and hands-on technical know-how to implement the right technological solution for each specific business need.

Administrators handle the day-to-day IT functions of an organization [source: Bureau of Labor Statistics]. Their job is to make sure that the information systems -- networks, databases, e-mail, Internet/intranet -- are running smoothly and securely. Network and systems administrators constantly monitor and adjust the system to limit downtime and allocate bandwidth. Administrators spend a lot of time troubleshooting network and systems errors. They're also often responsible for the security of information systems. In larger organizations, this role is performed by computer security specialists [source: Bureau of Labor Statistics].

The specific responsibility of an engineer varies widely with the job title. Network engineers, for example, are a lot like network administrators. Their responsibility is the "plumbing" of the information systems, making sure that networks are wired correctly, efficiently and securely [source: Princeton Review]. Software engineers, on the other hand, are programmers who develop, test and implement system software and user applications. The educational requirements are very different, too. Network engineers learn much of what they do on the job, while software engineers would need solid backgrounds in programming, electronics and math [source: CareerVoyages].

According to United States Department of Labor statistics, the job of computer support specialist is the third fastest-growing IT career [source: CareerVoyages]. Support specialists work with computer users to resolve problems with hardware and software. They can work inside an organization as IT support specialists or over the phone as help desk technicians for hardware and software companies. Support specialists don't need to have as much education as their IT counterparts; only 41 percent of current IT support workers have a college degree. But more than anything, this job requires strong interpersonal skills and the patience to work with a less-than-tech-savvy general public [source: Princeton Review]. Support specialist is considered an entry-level IT position with the possibility of moving up to engineer or administrator work.

Within the field of Web specialists are Internet/intranet managers, Web developers, information architects and Web designers. These specialists are responsible for designing corporate intranets and public Internet sites for organizations. Internet and intranet sites require Web servers and complicated back-end integration with other internal databases and application servers. There's a lot of crossover between the skills and duties of network/information systems jobs and Web development jobs. Much of the day-to-day work involves programming and designing the complicated networks that make today's dynamic Web sites run.

Information architects and Web designers develop, test and implement the graphical user interfaces (GUI) that end up on the actual Web site. All Web specialist jobs require workers to be on top of the latest developments in Web technology. If an executive sees a cool functionality on a competitor's Web site, he's going to want it on his site, too -- and fast [source: Princeton Review].

Now let's quickly talk about the salary breakdowns and job outlook for various IT careers. 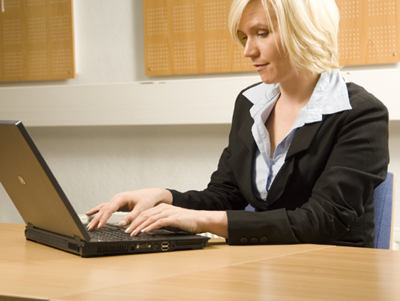 Overall, IT careers are some of the highest-paid, most in-demand jobs on the market. According to a 2005 Department of Labor survey, there were more than 2.8 million IT workers in the United States, earning an average salary of $67,010 [source: CareerVoyages]. Also, IT job openings are expected to grow by 1.3 million between 2004 and 2014, indicating an IT job market growth of 31 percent [source: CareerVoyages].

Of those IT jobs, application software engineers are in the highest-demand, with 268,000 jobs opening up in the next decade in the United States. According to 2006 statistics, the mean (average) annual salary for an applications software engineer was $82,000 with those in the 90th percentile earning as much as $120,000 annually [source: Bureau of Labor Statistics]. Some of the highest-paying industries for application software engineers are the telecommunications, computer manufacturing and financial sectors [source: Bureau of Labor Statistics]. The most jobs with the highest pay scale can be found in California.

According to Business 2.0 magazine, two of the five hottest jobs in America in late 2007 are computer programmer and hardware engineer (computer programmer is number one) [source: CNN]. These stats come from the percentage of online job postings dedicated to these fields.

Although numbers are back on the rise, there's still a talent crunch. And when demand is up, so are salaries. According to 2007 numbers from the National Association of Colleges and Employers, the average salary offer to a computer science graduate was up 4.5 percent from 2006, to $53,051. Management information systems graduates saw salary average salary offers of $49,966, up 5.9 percent from a year before [source: Chronicle of Higher Education].

Hopefully this article has given you a better understanding of the education and career opportunities available in the information technology sector.

For more information about IT and related topics, check out the links on the next page.