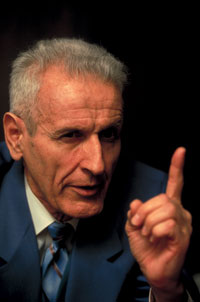 While Dr. Jack Kevorkian's euthanasia work has been controversial (and often illegal), he has contributed to the ongoing debate about the morality of physician-assisted suicide.
Steve Liss/Time Life Pictures/ Getty Images

The charter includes a "set of professional responsibilities" that are expected of doctors. Responsibilities are outlined with an overarching phrase, such as "commitment to honesty with patients," followed by several sentences of explanation [source: Annals of Internal Medicine]. Besides defining these principles, the charter also serves to facilitate discussion about medical practices across societies and cultures and to consider issues particular to the modern era. For example, many of today's doctors face conflicts of interest either by advising, working for or otherwise interacting with drug companies.

The Charter on Medical Professionalism won't necessarily replace the Hippocratic Oath, though it does cover many of the same issues. Both documents share some core principles, including the overriding importance of patient health, patient confidentiality and nonsexual relationships with patients. But there are some problems with the charter as a potential replacement, including its length: 1,445 words compared to the 341 words of the modern version of the Hippocratic Oath.

The charter is more of a statement of general principles than an oath to be invoked. Some of these points are open to interpretation, which could be positive, given that medical techniques, relevant laws and cultural practices vary around the world. But this vagueness may hinder the charter's adoption. Consider this excerpt from the paragraph about the "principle of patient autonomy":

Patients' decisions about their care must be paramount, as long as those decisions are in keeping with ethical practice and do not lead to demands for inappropriate care [source: Annals of Internal Medicine]

What are these ethical practices? What is "inappropriate care," and how can it be defined? These are the sorts of questions raised by critics of the charter.

There are other influential medical documents besides the Hippocratic Oath and the Charter on Medical Professionalism. The Declaration of Geneva, also called the World Medical Association International Code of Medical Ethics, contains many of the same principles found in the charter but is often more explicit: "A physician shall respect a competent patient's right to accept or refuse treatment" [source: World Medical Association]. It includes three sections -- Duties of Physicians in General, Duties of Physicians to Patients and Duties of Physicians to Colleagues -- as well as a short oath to be taken when a doctor is admitted to practice medicine.

The Declaration of Helsinki, first adopted in 1964 and amended five times since, prohibits experimentation on humans. The declaration draws clear lines for acceptable medical research involving human subjects, such as vaccines. The document was created in order to outlaw the kind of brutal, inhumane experimentation performed on human subjects by Nazi doctors.

If a successor to the Lasagna version of the Hippocratic Oath eventually emerges, it will likely draw inspiration from the Charter on Medical Professionalism and these other documents that have widespread support. For more information about the Hippocratic Oath and other related topics, please refer to the links below.

"Hippocratic oath" has become a sort of catchall term for a code of ethics for a profession. Recently, there have even been calls for a Hippocratic oath for "green" businesses [source: Ecopreneurist].