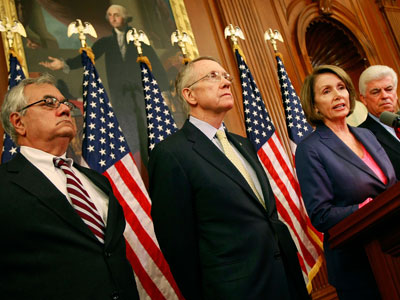 The Emergency Economic Stabilization Act (EESA) is the largest act of governance the U.S. financial markets have seen since the Great Depression. Under the EESA, the government is not a laissez-faire entity in American capitalism -- it becomes a major player.

Under the bill, the Office of Financial Stability (OFS), led by the Treasury Secretary, would be immediately authorized to use $350 billion in taxpayer money (raised through treasury bonds) to purchase bad debt from financial institutions in the form of mortgages and mortgage-backed securities (MBSs). The bill also authorizes the OFS to issue insurance policies on bad debts, in lieu of buying debt outright. After the first $350 billion is spent, the OFS can request two more sums -- $100 billion, followed by $250 billion -- both issued upon Congressional approval.

The EESA gives the government a lot of leverage to make demands on sellers from whom the OFS purchases bad securities. Institutions and firms that sell $300 million or more in debt instruments to the government are required to give the OFS a stake in their companies. These stakes, in the form of warrants, amount to shares in a company and protect the government on the back end. Because MBSs were divided and repackaged again and again, it's difficult to determine their value [source: USA Today]. If a seller benefits from the sale of its securities because the government paid a high price, the government will also reap the benefits since the shares it holds will rise in value. Companies shouldn't expect any windfalls; the OFS can refuse to purchase any debt for more than the seller originally paid [source: U.S. House].

The wording of the EESA consistently uses taxpayer protection as a benchmark for decision making. It directs the OFS to encourage lenders with which it's negotiating to refinance and restructure loans under the Hope for Homeowners Act (HOHA), passed in March 2008. This act issues new mortgages (structured in the borrower's favor) to replace those in danger of foreclosure. The HOHA is a voluntary program, however, and nothing in the EESA makes it compulsory.

Ultimately, the EESA could prove to be a boon for taxpayers. The act allows for the OFS to hold onto the bad securities until they regain their value. The OFS's ability to negotiate to stop foreclosures and infuse cash into the markets should theoretically stabilize the economy. Once stable, the securities the government purchased should increase in value and can be sold again at a higher price. The act could also harm taxpayers, since it's not guaranteed the government will make a return on such a large investment. If a shortfall occurs between the combined purchase and sale prices, the act calls for a proposal by the president to be submitted to force EESA-participating financial institutions to make up the difference. The act also requires proposals for new oversights of the financial markets.

Whether the bailout will be enough to fend off a major recession remains to be seen.