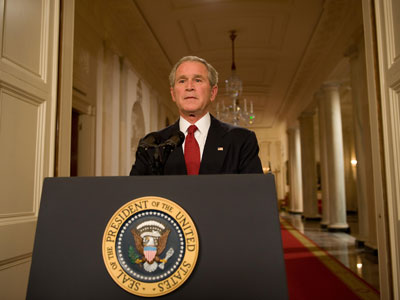 "Our entire economy is in danger," Pres. George W. Bush told Americans during an rare televised address to the nation on Wednesday, Sept. 24 [source: The Age]. The nation was already well aware. What had loomed as a meltdown in financial markets appeared to be trickling down to the average person. The sales of personal safes rose, as people sought a slightly better alternative to keeping money in failing banks or stuffing it in their mattresses [source: WDEF]. The collective entity that is America was jumpy; it seemed even a loud pop could send it into a panicked stampede.

Time was of the essence for passage of the Paulson Plan, named after Treasury Secretary Henry Paulson, who helped craft the proposal. The plan called for a $700 billion taxpayer bailout of financial institutions.

Not everyone agreed the plan was the best solution. One journalist concluded that the sweeping powers afforded to the government made the Paulson Plan "the financial equivalent of the Patriot Act" [source: New York Times]. CNN host Lou Dobbs questioned the use of taxpayer money to prevent a market correction: Some Americans would be paying to bailout the same institutions that were foreclosing on their homes [source: CNN].

After Bush's televised address, Congressional leaders continued marathon negotiations over the plan. The following Sunday, they announced the Emergency Economic Stabilization Act of 2008. Democrat leaders were confident it would be passed the next day. Instead, the bill suffered a surprise defeat, 228 to 205 [source: NPIA].

Two days later, the Senate deliberated a new version, adding "sweeteners" to make the bill more attractive. It was attached to a popular mental health bill. Expiring tax breaks were extended and middle-class tax relief was added. The Senate's bill also raised the Federal Deposit Insurance Corporation's guarantee on bank deposits from $100,000 to $250,000 [source: NPR]. ­The day it took up the bill the Senate passed their version, 74 to 25 [source: IBD]. On Friday, the House passed Senate amendment 5685, 263 to 171.

Find out what's inside the bailout on the next page.