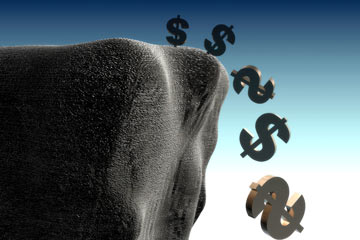 The fiscal cliff describes a series of U.S. tax increases and budget cuts scheduled to kick in during the first weeks of 2013 unless Congress acts to change them.
Hemera/Thinkstock

Americans may have very little to celebrate on New Year's Day 2013. If Congress is unable or unwilling to come to a compromise on scheduled tax increases -- the largest in 40 years -- and painful automatic budget cuts, the nation's economy will be pushed over a "fiscal cliff" in 2013. Before we get into the potentially devastating effects of that cliff, let's explain what the term means and how Americans arrived on the edge of economic free fall.

Federal Reserve chief Ben Bernanke was the first to use the term fiscal cliff to describe a series of tax increases and budget cuts that are scheduled to kick in during the first weeks of 2013 [source: Montgomery]. If allowed to happen, the nation would almost surely plunge back into recession, according to the nonpartisan Congressional Budget Office [source: O'Keefe]. Another colorful term for the apocalyptic economic moment is "taxmageddon."

But why would Congress have passed legislation that would put the U.S. in such a mess? To answer that question, we have to go back to the debt ceiling crisis of 2011. Congress is the one that authorizes the U.S. Treasury to borrow money to pay for federal programs. When the Treasury reaches its borrowing limit, it asks Congress to raise the limit by a few hundred billion dollars, which Congress has done dozens of times [source: The New York Times].

In 2011, however, fiscally conservative tea party Republicans in the House of Representatives refused to pass any legislation that raised the national debt. They were also opposed to any debt-reduction plan that included tax increases. Without the ability to borrow money or raise tax revenue, the Treasury couldn't pay off its other debts, meaning the federal government was poised to default.

Despite months of feverish negotiations, the White House and Congress were deadlocked. In a last-minute fix, the two sides agreed to $2.4 trillion in budget cuts over the next 10 years. Only $900 billion of those cuts would be made immediately. The rest would begin automatically in early January 2013 unless the two sides could negotiate a better deal in the interim [source: The New York Times]. When a nonpartisan congressional "supercommittee" failed to reach a compromise, negotiations were tabled until after the 2012 presidential elections.

As of this writing, there is still no deal to avoid the automatic spending cuts scheduled for 2013. There is also no agreement on whether or not to extend the Bush-era tax cuts past the end of 2012. If no action is taken on these two fronts, there could be grave economic effects. We'll detail the damage on the next page.

Economic Effects of the Fiscal Cliff

In an election year when Republicans and Democrats agree on very little, both sides warn that allowing the economy to run off the fiscal cliff would be ruinous. The Congressional Budget Office concurs, calculating that a combination of large tax increases and deep budget cuts would raise unemployment levels higher than 9 percent and sink the economy into another recession [source: O'Keefe].

The fiscal cliff will be so damaging to the U.S. economy because it slows down two critical engines of the economy: consumer spending and government spending.

Consumer spending will decrease because a greater chunk of Americans' paychecks will go to taxes. In 2010, President Obama extended the Bush-era tax cuts through 2012. If allowed to expire, 90 percent of Americans would see their tax rates go up by an average of $3,500 per family [source: Montgomery]. That amounts to cutting 6 percent from each paycheck. With less money in their pockets, consumers will buy less stuff. When companies sell less, they cut jobs, investors back off and the economy shrinks. Bad news all around.

Then there are the budget cuts. Unless Congress comes up with an alternative deficit-reduction plan, it will have to make deep budget cuts to federal programs in January 2013. These cuts, amounting to $109 billion a year from 2013 to 2021, will affect federal programs across the board, but defense spending will take the biggest hit [source: Khimm]. Defense programs will see a 9.4 percent reduction in spending, or roughly $55 billion a year [source: Grant]. Non-defense programs will also be cut by an average of 8.2 percent, including popular programs like special education and Medicare [source: Weisman].

When the government spends less money, the economy suffers. Defense contractors that make the planes and ships for the military will see their orders drop. Hospitals that rely on Medicare payments will have to cut staff, as will public schools that count on government-funded special education programs. This is why the CBO expects unemployment to surge past 9 percent if budget cuts are allowed to proceed as planned.

The only economic upside of the fiscal cliff is that it would significantly lower the federal budget deficit. The projected deficit for 2013 would drop to $641 billion if America runs off the fiscal cliff. If the U.S. avoids the cliff, it will be $1 trillion. This could translate to a debt-to-GDP ratio of 58 percent in 2022 as opposed to one of 90 percent without the cliff [source: Kurtzleben].

In a perfect political world, Congress would pass legislation that trims the deficit without inflicting so much pain on the economy. But we live in the real world. On the next page, we'll look at a few different scenarios for steering clear of the fiscal cliff. 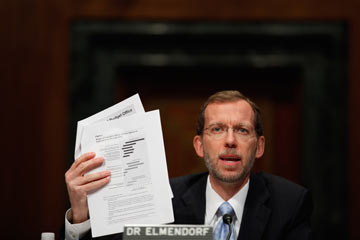 How can the U.S. government sue a business?
Why Do Some U.S. Bills Have a Star at the End of the Serial Number?
How Volunteer Vacations Work