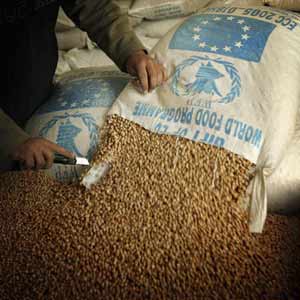 World hunger is a global issue and it will take a global effort to find the solution. With the help of world hunger organizations, one day that solution could be within reach.
Abid Katib/Getty Images Europe

Today, the total world population is almost 7 billion people. And of those billions of people, 20 percent of them live below the international poverty line. This rate is quite alarming, especially when you consider that the international poverty line is just $1.25 a day -- or $456.25 a year. As a result of this poverty, more than 950 million people worldwide are suffering from hunger [source: Bread].

Perhaps a better term to describe the epidemic that is world hunger would be malnutrition. This is different from starvation. Many of those suffering from world hunger don't actually starve to death. They simply don't get enough nutrients to maintain an acceptable level of human health [source: World Hunger]. Malnutrition can affect growth as well as the immune system and people suffering from it are much more likely to die from illness. Unfortunately, a large number of the malnourished are children and they are dying at the alarmingly high rate of one death every five seconds [source: Bread].

The truly frustrating part is that the world actually does produce enough food to feed everyone. Unfortunately, many people simply can't afford to buy it. To stop world hunger, we must put an end to world poverty. With 7 billion people on the planet and 80 percent of them living in low or lower-middle income economies, this is no small task [source: Bread].

In recent years, a number of organizations have been formed to combat hunger and poverty. While they are all finding ways to help, the ultimate solution relies on several factors, and though most organizations are hoping to achieve the same goal, many of them approach it differently. Some are working toward new methods for distribution while others are finding ways to get governments involved. World hunger is a global issue and it will take a global effort to find the solution. With the help of world hunger organizations like Bread for the World, UNICEF and Freedom From Hunger, one day that solution could be within reach.

Keep reading to find out how you can help fight hunger.

There are several different ways you can become involved in the fight against world hunger. The first step is finding an organization that you want to support. There are many out there to choose from and the list continues to grow as more and more people become aware of the crisis at hand.

Decide how you want to help. Most commonly, people donate either their time or their money. Bread for the World is a Christian organization that is attacking the problem by pushing Congress to act. Members of the organization write letters and e-mails as well as meet with representatives in person in the hopes of achieving their goals. You can become a member by making a donation [source: Bread for the World].

CARE is another organization that is fighting to end world hunger. It is one of the organizations with many campaigns, which also include education and the fight against HIV/Aids. Uniquely, CARE is geared toward women. You can help by making a donation or volunteering. Similar to Bread for the World, CARE hopes to get the attention of government officials in order to make a difference. CARE believes that changing the way food gets to poor communities can help lower costs [source: CARE].

Freedom from Hunger is an organization that works with local communities to solve hunger. It currently operates in 17 different countries, focusing on the health of mothers and children. As always, you can help by making a donation. For those hoping to get more involved, Freedom from Hunger utilizes volunteers and also offers job opportunities as well as internships [source: Freedom from Hunger].

Perhaps one of the most well known organizations working toward an end to world hunger, as well as world poverty, is UNICEF, the United Nations Children's Fund. UNICEF works to provide a voice for children in need and it operates entirely on voluntary donations [source: UNICEF].

To learn more about volunteering, visit the links of the next page.

Not all those suffering from world hunger live in developing countries. In fact, according to 2007 estimates, nearly 11 percent of Americans suffer from hunger or the risk of hunger. That's more than 35 million people -- more than a third of whom are children [source: ELCA].