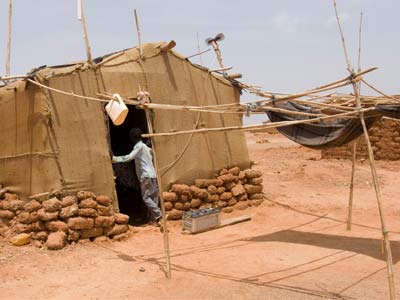 In March 2013, Faez al Sharaa lived in Daraa, Syria, the city where protests against President Bashar Assad quickly turned deadly two years earlier. After the anti-government uprising began, the country descended into civil war, with more than 4.8 million Syrian refugees and about 470,000 Syrians killed as of 2016 [sources: United Nations High Commissioner for Refugees, Syrian Center for Policy Research]. Civilians faced the threat of displacement and death at the hands of Assad's forces, which has used ballistic missiles, barrel bombs and massacres to attempt to defeat the opposition.

One day, after he was held at gunpoint and called a terrorist by Syrian soldiers, al Sharaa decided to leave Syria. He and his wife, Shaza, fled the war-torn country for Jordan. After staying at a refugee camp riddled with violence, working a night job to evade detection and enduring rounds of security screening by the United Nations, he headed to Texas with his wife and infant daughter, who was born in Jordan.

The al Sharaas' story ends positively. But not all turn out that way for the estimated 65.3 million forcibly displaced people worldwide [source: UNHCR]. The circumstances vary, yet the experiences are the same: People are forced to leave their homes and flee to another country to avoid persecution because of race, religion, nationality, social standing or politics.

To help victims of war and civil conflict from across the globe — from Bangladesh to Burundi and Somalia to Syria — hundreds of refugee charity organizations have sprung up to provide food, shelter and household necessities as well as to advocate for human rights, establish medical clinics and get children back in school [source: A.R.T.].

The organizations range from Physicians for Human Rights, a Cambridge, Mass.-based group of 300 doctors who provide free medical and psychological evaluations of asylum seekers, to the International Rescue Committee, a New York-based non-profit that provides relief, protection and resettlement services for victims of oppression and violent conflict.

Other organizations include the Lawyers Committee for Human Rights, which lobbies the U.S. government for better protection of refugees seeking asylum, and Lutheran Immigrant and Refugee Services, which specializes in helping children who come to the U.S. without family.

Read on to learn what the Office of Refugee Resettlement does.

The Office of Refugee Resettlement (ORR) is a division of the U.S. Department of Health and Human services that funds state-administered programs to help refugees assimilate to life in the U.S. Through its five divisions and 20-plus programs, ORR provides services to cover all areas of life, from health care and job training to education, foster care and counseling for torture survivors [source: ORR].

The office provides cash reimbursement to states to cover 100 percent of refugee medical screening and health care for up to eight months from the date of a refugee's arrival in the U.S. or final grant of asylum.

It also funds programs that place refugee children unaccompanied by adults into foster care sponsored by the U.S. Conference of Catholic Bishops and Lutheran Immigration and Refugee Service. The refugee children receive the same state benefits as other foster children, with additional programs aimed to preserve their cultural heritage. When possible, they are placed with families of the same ethnic background [source: ORR].

Another area ORR supports is state services to help new refugees get jobs within a year of arrival, including interpretation and translation services, childcare and literacy classes. It also provides funding to state school districts particularly impacted by an influx of refugee students to help pay for ESL classes, tutoring and after-school activities.

Keep reading to find out how you can help refugees at home or abroad.

Every year, an average of 1,220 refugee children arrive in the U.S. alone to join family members, escape abusive home lives and find work to support their families. Most of these kids come from Honduras (30 percent), Guatemala (28 percent), El Salvador (24 percent) and Mexico (10 percent) [source: ORR].

Most of the refugees who come to the U.S. speak little English and have nothing more than the clothes on their backs. Volunteers at charities like Exodus in Chicago help refugees by setting them up with housing in the U.S. The volunteers gather a one-month supply of household items, including kitchenware, toys and clothing, for each family's furnished apartment, which is subsidized by Exodus.

The volunteers meet the family when they arrive, introduce them to other refugee families in the building and assign a social worker to help them enroll in English classes and job training [source: Gilchrist].

Many organizations, like the Immigrant and Refugee Community Organization (IRCO), were founded to address a particular problem, such as the influx of refugees from Vietnam, Laos and Cambodia that flooded into Portland, Ore., following the Vietnam War. As need grew and the world became a smaller place, the organizations typically branched out into helping refugees in other parts of the world.

When it comes to wars and civil unrest, countless people suffer. However, they don't have to do so indefinitely thanks to the help of hundreds of organizations and even more individuals. And a little aid can go a long way.

With the help of the U.N., Frishta Mirbacha became one of the lucky ones in 2000, when its refugee agency relocated her family to Richmond, Va. Now married with an infant daughter and living in Washington D.C., Frishta is about to graduate with a degree in accounting -- a dream that was impossible in her native Afghanistan [source: U.S. Committee for Refugee and Immigrants].

More than 60 countries around the globe now house refugees, with Turkey topping the list as home to more refugees than any other country in the world -- 1.59 million at the end of 2014 [source: UN High Commissioner for Refugees].