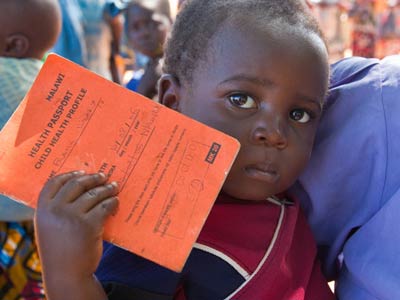 A child clutches his health profile outside the Queen Elizabeth Central Hospital in Blantyre, Malawi. Although Malawi has a population of more than 10 million, there are less than 300 doctors.
Photo courtesy Jim Matiko

HVO is "a private non-profit organization dedicated to improving the availability and quality of health care in developing countries through the training and education of local health care providers" [source: HVOUSA]. Although HVO was founded and is headquartered in Washington, D.C., it isn't a government organization. Only about 7 percent of HVO's funding comes from the government; the rest comes from companies, professional associations, foundations and private individuals.

The HVO's Board of Directors are unpaid volunteers who focus on the organization's mission, policies and finances. An executive director, who reports to the Board of Directors, oversees a staff of 14 people and has a budget of about $8 million. More than 98 percent of this budget is spent on HVO's programs -- the rest goes to pay administration, fund raising and membership costs.

The organization stresses the importance of being sensitive to local cultures and customs as well as cooperating with the government and organizations of the host country. Volunteers shouldn't expect conditions and procedures used by local medical professionals to be just like those in the United States. Just as Dr. Crenshaw suggested in his 1984 article, HVO volunteers are expected to use locally available technology and supplies as much as possible so that the medical professionals they train can sustain the programs and practices they have established. If volunteers see a need for donated supplies or equipment, it has to be able to work for the area. For example, equipment requiring electricity wouldn't be very helpful in an area where electrical service isn't reliable.

Volunteers with HVO have worked in 25 different developing countries located in Africa, the Caribbean, Eastern Europe, Latin America, Oceania, East Asia and South Asia. Each year, an average of 400 medical professionals volunteer their time, and there are about 1500 new volunteers.

Next, we'll look at the divisions these volunteers serve under and the professional associations that sponsor the HVO.