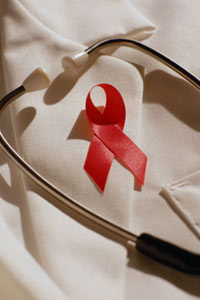 Many organizations work to fight the global epidemic of AIDS through education and testing.
Steve Cole/Photodisc/Getty Images

In the late 1970s, a mystery illness appeared in a few men. Their body weight dropped precipitously. Their immune systems were destroyed. They had no defenses against diseases that the body usually fights off with ease -- a skin cancer known as Kaposi's sarcoma, candida infections and an unusual strain of pneumonia [souce: Avert]. Eventually scientists would give the disease the name Acquired Immune Deficit Syndrome, or AIDS.

After its initial appearance, several years passed before medical professionals recognized that a virus -- the Human Immunodeficiency Virus -- caused the disease or that the disease could be spread through sexual contact, intravenous drug use and blood donations. It was 1985 before a U.S. president mentioned the disease in public.

In the first years of the epidemic, fear and misinformation reigned. Patients faced prejudice and hysteria, even violence. Early treatments involved such intensive drug regimens with such toxic prescriptions that patients who didn't die of the disease itself sometimes died of liver failure. One thing seemed clear: There was no cure. Those diagnosed with AIDS would have it for the rest of their lives, and their lives would be dramatically abbreviated.

Twenty years after the first cases appeared, approximately 30 million people were living with HIV/AIDS and more than 6 million AIDS-related deaths had been reported around the world [source: Aegis]. As of the end of 2007, the number of confirmed cases had risen to 33 million [source: Avert]. Though our information and our treatment options have improved dramatically, they still haven't been enough to halt the spread of AIDS, which remains a global crisis.

Some of the people fighting hardest to eradicate this terrifying epidemic are at AIDS organizations. The first AIDS organizations appeared in 1982, mere months after the disease received its name from the Centers for Disease Control [source: Avert].

Read on to learn about the work of AIDS organizations in the areas of education, testing and support.

AIDS is a global epidemic, and the only way to counter its spread is by having a well-informed global population. AIDS education organizations work to disseminate accurate, appropriate information to populations around the world. The information may focus on prevention or treatment. It may help an at-risk community recognize symptoms, understand safe-sex practices or learn about careful prescription use. It may work to counteract stereotypes, such as the misconception that AIDS is confined to intravenous drug users or gay men -- a belief that endangers quite a few people who don't realize they are at risk. It may also focus on tolerance since, in many areas, AIDS sufferers become the targets of prejudice, even hate crimes [source: Avert].

The human audience is diverse, and a huge part of AIDS education is knowing which messages are best suited for which audiences. For example, not every audience is literate. Pamphlets won't work with a population that can't read. For those populations, education groups must work to establish face-to-face ways of communicating their life-saving information. Working within existing social structures or trusted organizations can help [source: American Red Cross].

In many areas, AIDS education organizations must work to educate governments as well as citizens. Slow official response -- or, worse, ill-informed official response -- has helped the epidemic spread in far too many places, including the United States. AIDS education groups must sometimes work in opposition to an official policy of ignorance or misinformation. Even though a group may seek only to help individual citizens fight a rapacious disease, this work can quickly become political, even controversial.

One of the most significant factors in the spread of AIDS is denial. The disease can be silent, virtually symptomless; someone who is HIV-positive may feel so healthy that he is convinced he cannot be sick [source: Avert]. Sometimes it's a major victory just to persuade someone to get an HIV test. When that happens, a testing organization can help. Read on.

AIDS Education Beyond the Classroom

Though just a few decades ago the disease was unknown, AIDS education has played a crucial part in staunching the deadly epidemic. In addition to usual educational channels, AIDS information has been conveyed to a mass audience via popular culture such as music, TV and movies. For example, AIDS-centered films "Philadelphia," "And the Band Played On" and "Angels in America" brought the topic into viewers' living rooms via the recognizable faces of actors including Tom Hanks, Matthew Modine, Antonio Banderas and Denzel Washington [source: Hartl].

Getting a blood test is never a wholly pleasant experience. Add to it the specter of early death, curtailed sexual behavior and thousands of dollars in medical bills, and it's no wonder AIDS prevention organizations must struggle to convince people just to be tested.

That said -- why would someone visit an AIDS testing organization rather than his or her doctor? There are plenty of reasons.

One major reason is money. People with limited means, or no health insurance, avoid unnecessary trips to the doctor. A doctor's office might charge several hundred dollars in lab fees for a blood test that an AIDS organization will provide free of charge. And a blood test that doesn't involve someone's regular physician may also help the patient sidestep insurance companies' pre-existing condition exclusions, which can act to keep the insurance company from paying for any medical expenses related to the disease for as many as five years.

Another reason is shame. Often, AIDS is related to sexuality and sexual practices. Someone who has been unfaithful may not want to let the family physician in on the secret. Unfortunately, it's precisely this sort of secret keeping that spreads HIV within relationships [source: Howard Brown Health Center].

Other people may be grappling with issues of sexuality that they are not ready to confess to spouses or parents. Still others wrestle with drug use, and fear that the illegality of their addiction would open them to the risk of incarceration if they were tested at a large medical establishment. The anonymity of an AIDS testing organization can be a life saver -- not just for these people, but for their potential partners.

Precisely because of all the feelings that surround an HIV diagnosis, patients need a great deal of support. On the next page, we'll look at the organizations that can provide that support.

What does an AIDS test involve?

As in any other blood test, a nurse, doctor or physician's assistant will use a needle to draw blood, most likely from an arm vein at an exposed place such as the inner elbow. A lab tests the blood for antibodies that show exposure to the Human Immunodeficiency Virus (HIV). If the blood shows exposure, the person is HIV-positive. Tests designed to provide more rapid results work with saliva samples. These tests have a higher error rate, so they must be followed by blood tests [source: PAETC].

A diagnosis of HIV-positive status can be devastating -- so frightening that patients avoid it, deliberately not retrieving test results or engaging in other self-destructive behavior [source: PAETC]. But the truth is that HIV can often be managed, if the patient approaches the disease responsibly. To help patients do that, AIDS organizations provide information and emotional support.

Help can range from financial assistance to pay for medication to monthly support-group meetings. Some patients may have contracted the disease because of unsafe behavior; they may want to make major lifestyle changes or branch out to new groups of friends. AIDS organizations can help them find like-minded individuals and avoid future risks [source: ASG].

Other support is aimed at friends and family members of HIV patients. The people who care about a patient may have a lot of questions; they're likely curious about what the disease will do and how they can help the patient fight it. Also, they may have to deal with feelings of shame or betrayal. And, some could fear that they have been exposed to the virus.

AIDS patients, their friends and family members aren't the only people in need of AIDS Organization support. It can be difficult for health care providers to work exclusively with patients who have just received some of the worst news of their lives. Physicians treating patients who are in the later stages of AIDS may feel as though they're repeatedly going into battle against an untiring enemy. Support groups help physicians and clinicians muster the emotional and psychological strength to keep doing their necessary work. Support groups may also offer a way for health care providers to exchange information and ideas about helping their communities [source: MATEC].

AIDS menaces every human being on the planet. As one nonprofit says starkly, "If you don't think you're at risk, you're at risk" [source: Avert]. Worldwide, AIDS organizations are working to keep HIV from becoming a death sentence, and to ensure that sometime in the future the subject of AIDS will be taught only as a history lesson rather than a repeated topic in health class.

There are AIDS/HIV support organizations around the world. The Web site Cell Science maintains a global directory that includes country-by-country and state-by-state listings [source: Cell Science]. In the Information Age, no patient need suffer alone.

How Refugee Charity Organizations Work
How Project C.U.R.E. Works
How to Volunteer in Historical Reenactments