How to Volunteer for the Olympic National Park 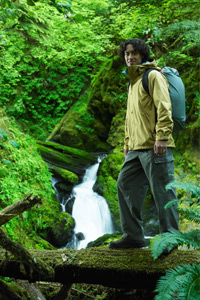 Olympic National Park, which is renowned for the diversity of its ecosystems, offers plenty of opportunities to volunteer.
Ryan McVay/ Lifesize/Getty Images

With more than 922,000 acres of wilderness, Olympic National Park in northwestern Washington offers stunning views of 73 miles of rugged coastline, glacier-capped Mount Olympus and a rainforest that is one of the wettest areas in the U.S.

It also offers plenty of opportunities to volunteer, with roughly 970 people donating their time each year to maintain trails and assist campers [source: National Parks Service].

In 1988, Congress designated 95 percent of the park, which was established by President Franklin D. Roosevelt in 1938, as wilderness. Located in the central region of the Olympic Peninsula just west of Seattle, the park welcomes a lot of visitors each year. In fact, five million people come to the park each year to hike its trails, camp along the Pacific Ocean and fish in its 3,000 miles of rivers and streams [source: National Parks Service]. If you're interested in getting behind the scenes, or working to maintain this nature refuge, there are plenty of prospects.

To help maintain this wilderness playground, Olympic National Park offers a variety of volunteer opportunities, including long-term assignments, internships and daylong projects. Recruiting for the summer season -- the most popular time of year -- begins in January with positions listed and regularly updated on the Olympic Park Web site [source: National Parks Service].

Olympic National Park offers school credit to college students doing certain projects through the parks service when arrangements are made through the volunteer office. It also sponsors projects for groups like boy scouts, youth organizations and schoolchildren with one months' notice. The expansive park has a lot of responsibility, so volunteers keep it running smoothly.

Read on to find out more about becoming an Olympic National Park volunteer.

There are many volunteer opportunities at Olympic National Park, from maintaining campgrounds to working with rangers to cataloging plant life in old-growth forests. You can research available postings by reviewing the listing on the park's Web site [source: National Parks Service]. The list is pretty extensive, so there's a good chance you'll find an arrangement that works for both you and the park.

Some internships -- typically for college students -- are offered through a partnership with the Student Conservation Association (SCA).

Requirements for these internships typically include having a valid driver's license, backpacking and hiking experience, leadership skills and computer knowledge [source: Student Conservation Association]. Housing is typically provided for the duration of the internship, along with wilderness training, basic search-and-rescue and wildfire education.

For those interested in a short-term project, Olympic National Park hosts quarterly beach cleanups -- daylong events during which you walk up and down the beach to pick up plastic water bottles, garbage and other marine debris that's washed ashore [source: Coast Savers].

Read on to discover the benefits of becoming an Olympic National Park volunteer.

If you're the leader of a group that's interested in helping out in the park, contract the volunteer office at (360) 565-3141 to find out how you can help. And plan ahead -- most group activities require at least one-month lead-time.

Benefits of Being an Olympic National Park Volunteer

If you're interested in communing with nature, meeting new people and/or learning search-and-rescue techniques, you may want to look into volunteering with the Olympic National Park. Especially considering those are just some of the benefits of becoming an Olympic National Park Volunteer. And if that's not enough to motivate you to fill out an online application, how about barbecues, free camping and making the world a better place?

You'll also earn the privilege of saying you worked in "three parks in one," since Olympic National Park is renowned for the diversity of its ecosystems, which include glaciers, rain forests and the longest stretch of undeveloped coastline in the lower 48 states [source: UNESCO].

There are plenty of reasons to volunteer in general as well. It's been said that those who volunteer are more likely to feel high levels of satisfaction. Beyond that, volunteers have reported lower rates of depression and overall better health, both mentally and physically as stated in a study by the Corporation for National & Community Service [source: CityTownInfo].

Like any volunteer opportunity, you should consider your personal interests before deciding where to sign on. But if you volunteer at Olympic National Park, you may just be rewarded by spotting an endangered northern spotted owl, marbled murrelet or bull trout.

And from sea level, the park rises to almost 8,000 feet at Mount Olympus -- all in fewer than 40 miles. Now that's something to write home about.

For more on how to volunteer with Olympic National Park, see the links on the following page.

If you're too tired for hiking and would rather write a check, you can send a donation to Washington's National Park Fund to help restore fragile vegetation throughout the park, create educational centers and preserve historic sites [source: National Park Service].