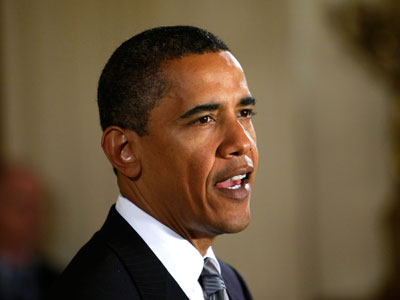 The president has issued a call to service. Will you answer it?
Alex Wong/Getty Images

Charity and philanthropy have a long history in the United States. Thomas Jefferson, the nation's third president and principal author of the Declaration of Independence, once said, "I believe … that every human mind feels pleasure in doing good to another" [source: University of Virginia]. Jefferson's sentiments continue to live on. Today, the United States is the most charitable country in the world, annually donating more than twice as much as Britain, the next most-giving country [source: Associated Press]. In fact, as of 2007, more than 27 percent of Americans contributed to their communities through volunteerism [source: Scherer].

Considering the United States' history of generosity, it's not surprising that many believe that philanthropy and charity hold an intrinsic place in American culture. Numerous presidents have encouraged that call to service. The Peace Corps was born from President John F. Kennedy's call in 1960 for students to serve the United States by residing and working in developing countries. George H. W. Bush's call for volunteerism in his 1989 inaugural address led to the creation of the Points of Light Institute, the largest volunteer organization in the country. On April 21, 2009, newly elected President Barack Obama signed the Edward M. Kennedy Serve America Act. This act dramatically expands the opportunities Americans have to volunteer and is perhaps the most ambitious call to service any president has ever made.

The Serve America Act wasn't President Obama's first call to Americans for service, however. A former community organizer, he believes that widespread volunteerism is a way to better both individual communities and the country as a whole. Obama has promoted the value of service and volunteerism throughout his time on the campaign trail and since taking office.

There are a myriad of ways you can answer the president's call for charitable service. From becoming a White House intern to housing a homeless pet, there are opportunities for everyone, regardless of age, income status or political affiliation.

Whether you agree with the president's agenda or not, you can answer his call for service in your local political community. All you have to do is find a local group and start volunteering, which is a lot easier to do than you might think.

Begin by thinking about an issue you feel passionately about. Try to focus on a common concern that you think people might rally around -- for example, the environment, government spending or health care.

Next, do a quick Internet search of the topic and see what comes up for your area. Chances are there will already be one or more groups established to call attention to the issue. Find a group or campaign you like, and contact them to see what volunteer opportunities they have available.

When you connect with an organization, use your talents. If you're a decent writer, perhaps you could try writing a few convincing letters to local congressmen and political leaders to endorse your cause. If you keep your cool in heavy downtown traffic, then you can shuttle other volunteers and concerned citizens to events and rallies.

Just don't expect everything about volunteer work to be fun and easy. It's great to collaborate with like-minded people coming together over a common cause, but no matter what, you can expect to do some grunt work -- regardless of your skill set or experience. Telemarketing, handing out flyers to apathetic and disinterested fellow citizens and even the much dreaded door-to-door canvassing are all par for the course.

The most important thing to remember, however, is that even though it might feel like your grassroots efforts don't matter or aren't making a difference, the fact is that they do. President Obama secured the Democratic nomination from presumed shoo-in Hillary Clinton in large part through his organized and effective grassroots movement [source: Hamburger]. The beauty of grassroots campaigns is that they're the backbone of the American political system. Regardless if you want to get a start in politics or just want to spend some time trying to support a political cause or candidate, grassroots campaigns are the place to do it.

Starting Your Own Grassroots Movement

What should you do if the cause you're most passionate about hasn't yet moved other citizens in your area to take action? If you're serious about making a difference, you may want to start your own grassroots campaign. The work is similar to what you'd do if you were to volunteer at an established campaign, except you initially do all of it by yourself. To rally more people to your cause, you can start a Web site, pass out flyers and establish your campaign's presence at local fairs and festivals. If you're convincing and people feel motivated to do something, before you know it, you'll be a bona fide grassroots leader. Just don't expect the title to get you out of knocking on doors or making cold calls.

If you live in the Washington, D.C., area, there are many volunteer opportunities that allow you to help the President of the United States directly. Some positions may even give you the opportunity to meet him in person.

One option (and best choice if you're hoping to score some one-on-one face time with the Commander-in-Chief) is to become a White House intern. White House interns typically do the grunt work of the administration, which includes everything from getting coffee for the staff to sorting through endless mounds of paperwork. The position may sound mundane, but it's one of the most sought-after internships in the country and gives those selected the opportunity to gain valuable insight and contacts in the American political arena [source: White House]. However, there are some pretty strict eligibility requirements. Internship candidates must be 18 years of age or older, a current or recent graduate or undergraduate student and must pass a detailed background check, among other things.

There are plenty of other opportunities to volunteer in D.C., even if you're not a college student. You may want to consider volunteering in the President's Park outside the White House. It's a pretty easy job, and some of the duties are not too far off from those prestigious White House interns. You can expect to make copies, answer phones and hand out literature to tourists. Eventually, you'll become a park expert and will be able to provide visitors with information on various exhibits, as well as direct them to White House tours and landmarks. The only requirements are for volunteers to be cordial, organized and reliable. They must also commit at least 10 hours a month to service. 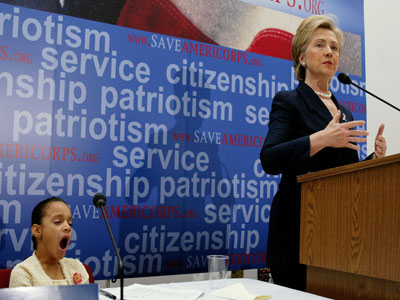 If you're looking to devote a significant amount of time to volunteer service, you may want to consider joining AmeriCorps. AmeriCorps was established in 1993 by President Bill Clinton and is generally considered to be a domestic version of the Peace Corps [source: AmeriCorps]. Most AmeriCorps positions require a major time investment but provide many benefits, not the least of which is being able to answer the president's call for service on both a local and a national level.

AmeriCorps State and National is the branch that oversees thousands of community-based service programs throughout the nation. Projects can be found in every state or U.S. territory and focus on various community needs in the realms of public health and safety, environment and education. Unlike VISTA and NCCC, state and national projects don't always require a full-time commitment from volunteers.

All three branches of AmeriCorps allow you to live and work almost anywhere in the country -- but you don't have to stray far from home if you don't want to. When you apply, you're asked to select in which states you would consider working. You should weigh this question carefully, as you will only be considered for the opportunities in those states.

Regardless of the program or the location you choose, you can expect some sort of compensation. Full-time volunteers will be provided a small allowance to pay their bills and cover necessities. Child-care and health insurance are also provided. Recent college graduates or students who plan to enter college are granted funds to help pay back loans or finance their education upon completion of their service.

Are you leery of grassroots volunteerism or not ready to devote hundreds -- or even thousands -- of hours to volunteer work? Don't worry, there are still plenty of ways you can help. In the next section, we'll explain how you can use anything from a concern for homeless pets to your video game skills to answer the president's call for service.

The Edward M. Kennedy Serve America Act more than triples the size and budget of AmeriCorps, bringing the annual number of volunteers from 75,000 to more than 250,000. It also increases the available education awards sum to $5,350, the same amount as the Pell Grant. The act goes into effect on Oct. 1, 2009 [source: ABC News].

Both on the campaign trail and since taking office, Barack Obama has promoted the value of volunteerism and community service. His service initiative Web site, Serve.gov, provides a "comprehensive clearinghouse of volunteer opportunities" for anybody interested in donating time to public service.

Serve.gov is kind of like the Google of volunteerism. It's straightforward, easy to use and instantly provides a thorough and diverse list of opportunities for any prospective good Samaritan. After directing your browser to the site, all you have to do is type in one of your interests or skills along with your ZIP code in the boxes under the "Find a Volunteer Opportunity" in the center of the home page. The Serve.gov/Google similarities continue in the search results, because no matter what your interests are, the site will probably find some opportunities for you.

Of course, some topics are more plentiful than others. For example, in a search of the metropolitan Atlanta area, 75 results appeared for "environment," 59 for "animals" and 139 for "housing." These are terms that embody common charitable causes, so multiple results are to be expected.

But what if you want something that speaks more specifically to your unique interests? This is where Serve.gov gets interesting. In the same ZIP code, a search for "video games" delivered 19 results, with several opportunities for teens and young adults to go to a nearby YMCA and play video games with local children. Another search for "comic books" turned up 39 results, providing a diverse assessment of opportunities for the willing comic bibliophile. Several opportunities centered around local literacy campaigns and libraries, and one was for a board member for a nonprofit organization supporting gay, lesbian, bisexual and transgendered comic books and their creators and readers. So you never know what options are out there unless you look.

It's important to remember that the point of President Obama's service initiative is not to aid the causes he's interested in: It's for you to contribute and invest in your community in your own way, regardless if that means providing foster homes to stray dogs or playing games with local children. So with that in mind, if you have some spare time and would like to spend some of it helping your community, head over to Serve.gov and get to work!

The Service of the Future

It's got an excellent search engine and easy-to-use interface, but Serve.gov has plans for the future. Eventually, the Web site promises to include additional tools to increase user traffic and help create local volunteer networks.