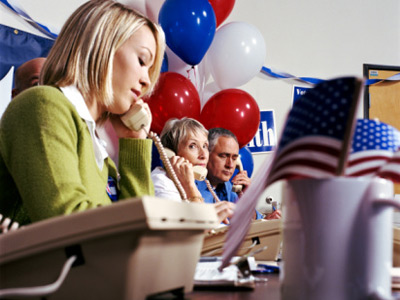 Every year, 62 million Americans volunteer at their local schools, hospices, thrift shops, community centers and homeless shelters. From museums to parks, animals to people, education to conservation, there are thousands of volunteer opportunities that span just about every skill and talent.

Currently, 26 percent of the population donates an average of 52 hours of time (per person) a year -- about an hour a week [source: United States Department of Labor/Bureau of Labor Statistics]. The most active volunteers are those between the ages of 35 to 44, with women volunteering at a higher rate (29.4 percent) than men (23.2 percent) do. All of these people deserve a collective pat on the back, which they get during National Volunteer Week in April.

Every third week of April, nonprofits, community groups, volunteer centers, corporations, and city and state governments hold receptions, luncheons and other special events to recognize their volunteers. During this time, organizations often hand out awards or gifts to volunteers to acknowledge their contributions.

The purpose of National Volunteer week is to not only thank current volunteers but to encourage more people to volunteer by drawing attention to those who are already helping make the world a better place [source: Corporation for National & Community Service].

As the number of social issues continues to multiply as fast as our population, charities use this week to recruit more people to help ease the strain of an ever-increasing need for volunteers.

Read on to find out which president signed the proclamation that established National Volunteer Week.

Calling voluntarism "one of the hallmarks of American life," President Richard Nixon signed an executive order on April 20, 1974, declaring that the week be dedicated to those who give their time to charity.

"I urge all Americans to observe that week by seeking out an area in their community in which they can give to a needy individual or worthy cause by devoting a few hours, or more, to volunteer service," Nixon said in the proclamation that established National Volunteer Week [source: The American Presidency Project].

Since then, all the U.S. presidents who've followed have renewed the pledge, adding their own platitudes about the virtues of volunteering.

During his state of the union address in 1991, President George H.W. Bush said that the way to renew America is to "find meaning and reward by serving some purpose higher than ourselves, a shining purpose, the illumination of a thousand points of light."

The Points of Light Foundation & Volunteer Center, a Washington D.C.-based nonprofit founded in the early 1990s to support volunteer organization, named itself after that phrase in Bush's speech.

Since then, The Points of Light Foundation (now called the Points of Light Institute after merging with the Hands On Network in 2007) has sponsored National Volunteer Week, providing nonprofits with resource guides that provide ideas for how to reward volunteers and get media attention for events, including a press release template [source: Foundation Center].

The institute has more than 360 volunteer centers around the country that help local nonprofits establish and improve their volunteer programs, including running a national, toll-free hotline (1-800-Volunteer) that gives callers information about volunteer opportunities in their community [source: Points of Light].

Read on to find some ideas for how to celebrate your volunteers.

Two national holidays fall within National Volunteer Week: Earth Day on April 22, which is designed to raise awareness about protecting the environment, and Global Youth Service Day, celebrated on the weekend of April 24 to 26, to reward children who do volunteer work [source: Foundation Center].

Looking for an opportunity to feed your longstanding fascination with the movie, "Grease"?

How about hosting a 1950s-themed "Volunteers Rock!" luncheon? You can dress up in '50s style clothing, blast Chuck Berry on a jukebox and send a few roller skaters around to serve trays of bazooka bubble gum and red licorice. That's what North County Lifeline Inc., a nonprofit that serves troubled youth in San Diego, did [source: Energize Inc].

Or you could do your best impersonation of Alex Trebek and host a game of "Jeopardy," quizzing volunteers on trivia related to the work of your charity. And don't underestimate the power of crazy hats. One nonprofit called its volunteer recognition party "Hats off to You" and had all the staff wear outrageous hats [source: Energize Inc].

Another charity used an Olympic theme, calling its event "Volunteers Are Gold." In a room decorated in red, white and blue, staff members greeted volunteers and placed gold medals around the their necks.

If you're interested in something a little more low-key, you can sponsor an essay contest in which the clients you serve write essays describing what their mentors mean to them. You can post the essays on your Web site and award prizes to the top three [source: Energize Inc].

No matter how you celebrate, remember to start your planning early -- at least a few months in advance. You may want to invite a celebrity or other dignitary that could draw media coverage. And don't forget to smile for the photographer you hired to chronicle the event.

For more on National Volunteer Week, see the links on the following page.

One way to draw publicity to your organization during National Volunteer Week is to tell the story of a particularly intriguing volunteer. Explain how the volunteer got involved in the cause, what he or she finds rewarding about it and why others should volunteer, too.

Did women volunteers serve in World War II?
How the Office of Civilian Defense Worked
How to Volunteer Income Tax Assistance