What is a double-dip recession? 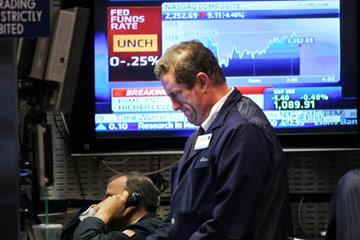 Traders work the floor of the New York Stock Exchange in June 2010, amid fears of a double-dip recession.
Spencer Platt/Getty Images

A recession is defined as two consecutive quarters of shrinking gross domestic product (GDP). The United States experienced four consecutive quarters of negative GDP growth from the third quarter of 2008 through the second quarter of 2009, a bona fide recession. But even after the GDP began to increase, worrisome global economic conditions -- high U.S. unemployment, the European debt crisis, threats of runaway inflation at home and abroad, the Gulf oil spill and more -- left many wondering if the recovery would be short-lived.

By the summer of 2010, prominent economists and media commentators were predicting a double-dip recession, a situation where the economy begins to recover from a recession, then plunges right back in. For the record, the National Bureau of Economic Research (NBER) doesn't recognize the term and economists debate whether the dreaded event has ever happened [source: Tseng]. The top contenders are the back-to-back recessions of the early 1980s and even the Great Depression, which some argue was a recession that began to improve in 1937, but double-dipped when interest rates got out of hand.

Something all economists can agree upon is that consumers play a critical role in ending recessions. Consumer spending accounts for at least two-thirds of the total GDP in the U.S. One of the warning signs of a double-dip recession is stagnation of consumer confidence in the economy -- even in the face of a burgeoning recovery. The Consumer Confidence Index, as calculated by the non-profit Conference Board, bottomed out in February 2009 at 25.3 [source: Rooney]. (A reading above 90 shows economic stability; a reading above 100 is a sign of economic growth.)That number climbed as the economy recovered, but then took a precipitous drop in June 2010 after a series of poor jobs reports. Low confidence in the economy usually means that consumers tighten their purse strings and cut spending.

According to the Bureau of Economic Analysis, however, consumer spending actually increased at a modest rate over the second half of 2010, even as disposable consumer income decreased in some months. The Federal Reserve also did its part to stave off a double-dip. In an effort to keep interest rates low, it bought hundreds of billions of dollars of Treasury securities [source: Chan]. Historically, low interest rates have spurred corporate and household borrowing, and the cheaper dollar has been a boon to exports. Slimmed down corporations also had a great finish to 2010; 359 of the S&P 500 firms beat earning expectations in the fourth quarter [source: Newman].

The double-dip scare seems to have faded for now. GDP grew by 2.6 percent and 3.2 percent in the third and fourth quarters of 2010 respectively [source: Bureau of Economic Analysis]. But after a decade humbled by more than its fair share of economic crises, we can be forgiven for thinking the next dip is just over the horizon.

For lots more about recessions, depressions and the Fed, take a look at the links on the next page.