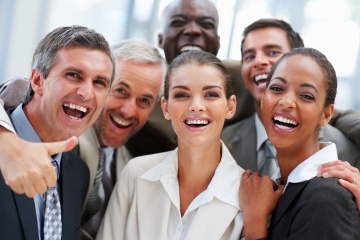 Choosing the best job can be daunting, but does your happiness fall only in your hands or are there other factors that you can't control?
Yuri Arcurs/Thinkstock

"Choose a job you love and you'll never work a day in your life." -- Unknown

Great quote, and while it makes sense, it's probably not practical for most workers — after all, someone has to tackle those tasks that no one really wants to do. For the vast majority of workers, it's much more realistic to simply find a job where you can make a good living, and if possible, to make it through each day with a smile on your face. But can you really predict workplace happiness simply by choosing the right industry? While a couple of surveys show recurring themes, the link between happiness and industry can change depending on who you ask.

A 2013 survey by Career Bliss which focused on midlevel workers — not CEOs and low-wage employees, but largely blue- and white-collar workers — found that the happiest industries included business management, real estate, utilities, educational services, construction, government and finance. Among the unhappiest industries, according to the same survey? Retail, transportation, wholesale trade, hospitality and the arts/entertainment/recreation arena [source: Career Bliss].

But a study by Rasmussen College conducted in 2014 offered some conflicting information. Finance, government and business management also ranked at the top of employee satisfaction surveys — but along with the wholesale trade, hospitality and arts/entertainment/recreation fields Career Bliss had ranked at the bottom of the heap. The difference could lie in demographics, however; while Career Bliss included only midlevel workers, the Rasmussen study was spread across a larger range, including both low- and high-wage employees [source: Erstad].

If it's happiness you seek, you may be better off searching based on specific careers, rather than lumping entire industries together. Career Bliss surveys conducted in 2013 [source: Career Bliss] and 2014 [source: Career Bliss] agreed with a British study reported by the BBC in 2014 — quality assurance is a consistently satisfying career on both sides of the pond [source: Easton]. Other upbeat options? Consider becoming a real estate agent, sales rep, finance professional, software engineer, construction manager, marketer or controller, all of which seem to come with a side of happiness.

Stuck in your current career and need a dose of cheer? Try out some of the strategies proven to boost workplace satisfaction, like allowing yourself to celebrate your accomplishments, learning new skills and enjoying the oddities of human nature by engaging with your colleagues in a positive way [source: James].