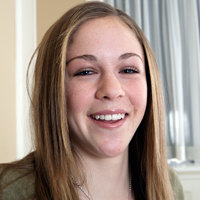 When she was seven years old, Kelly Voigt was attacked by a dog and savagely bitten in her face and throat. Plastic surgery repaired the physical damage, but emotionally, Kelly was a wreck. She suffered from post-traumatic stress and depression, and she was understandably terrified of dogs.

Through the help, encouragement and guidance of the people who were closest to her, Kelly found a way to deal with her experience. She decided to share it with others and do all she could to help others avoid her fate. Kelly started Prevent the Bite, an organization dedicated to teaching kids how to safely interact with dogs. Today, she travels from school to school, giving presentations and demonstrations. Casey, a golden retriever specially trained and certified as a therapy dog, often joins her. The program has three goals: teaching children the basics of canine body language, strategies for safe interacting with dogs and the principles of responsible dog ownership.

Kelly’s experience is much more common than you might think. According to Prevent the Bite, almost half of all children in the United States will be bitten by a dog by the time they turn 12. Together, Kelly and Casey are doing all they can to prevent as many of those bites as possible.

In 2007, Kelly, now 14, was named a BRICK Award winner in the category of Education and Environment. We had a chance to sit down with her and ask her about working with Casey, how to safely interact around dogs, and what she wants children to take away from her presentations.

HowStuffWorks: How did your traumatic experience at the age of seven inspire you to start speaking out and teaching children how to be safe around dogs?

Kelly Voigt: Well, after I was bit, I was suffering from Post-traumatic stress and depression. It was just really hard for me to get over my fear of dogs. My psychologist said that I was an expert on surviving a dog attack. So after that, I wanted to teach kids [about dog safety]. ‘Cause we researched it, and found that it's such a big problem. Four point seven million people are being bitten by dogs each year, and people don't know about that. And we just want to stop that. So we're trying to reach out to everybody, wherever we can.

HowStuffWorks: How did you take your idea to the next step? How did you get it out of the living room, and into the schools?

Kelly Voigt: Well, my school psychologist said she knew a friend that dealt with a therapy dog, Casey. So I met Nancy [Skeffington]. And she said she knew a little bit about dog safety. So we just researched it and found out how big a problem it was, and we just wanted to go and do more to help with it.

Kelly Voigt: When I first met her, I was afraid of her. And my first presentation -- I did it with her -- I actually sat down on the ground for a second, and she came over and sat in my lap. From that moment on, I knew I could trust this dog. She's my favorite dog ever.

HowStuffWorks: Is she a golden retriever?

Kelly Voigt: Yeah. She's just been to a lot of presentations with me, and she's just great.

HowStuffWorks: Who's the bigger draw when you show up to the schools, you or Casey?

Kelly Voigt: I think it's the dog. Everyone loves the dog. The dog just comes into the room, and everyone's excited.

HowStuffWorks: Do you notice a change in the attitudes of the kids between after you've done your presentation?

Kelly Voigt: When we are doing a presentation, we always ask who's been bitten, or knows somebody that's been bitten. And more than half the class [usually] raises their hand. When I tell my story, and they know how bad it was, and we tell them how many people are bitten each year, they know it's such a big problem. We tell them what to do around dogs. Because they don't know, they have no idea what to do. They just run up to the dogs, give them hugs and stuff, and they get bit. So we just tell them, they need to follow the steps. And a lot of kids are afraid of dogs, too. So when they see a dog, they stand like a tree. I get some e-mails from them that they did what I told them to, and it worked.

HowStuffWorks: And you tell them to stand still, let the dog come to you; get a sense of your scent. And what do you do with your hands?

Kelly Voigt: Fist. Fist to your side.

HowStuffWorks: To your side. And then let the dog come to you. Do you then bring a volunteer down to work it through with Casey? And are they just sometimes terrified of Casey?

Kelly Voigt: We let the teacher pick the kids and we have them raise their hands, so they're not afraid of dogs. But a lot of times they forget what we said, so we go through it [with them]. And when we're done, they do it. We give them a quiz, too. Before and after. So they know how much they've learned.

HowStuffWorks: What is the most rewarding thing that you've gotten from your work with Prevent the Bite?

HowStuffWorks: What do you enjoy most about going to different schools and presenting your program?

HowStuffWorks: What challenges did you face in the early going, getting Prevent the Bite off the ground?

Kelly Voigt: Well, we actually had a little money problem, because we didn't know what to do. We hand out flyers, and we make posters. And just getting all of that has been a little bit of a problem. But now the problem is that I'm in school, and I can't do as many [presentations] now.

HowStuffWorks: So you've started to train other people?

Kelly Voigt: Yeah. Actually, people around the world -- mostly the U.S. -- have been contacting us, and telling us that they want to do what I've been doing. We haven't actually gotten a chance to teach them yet, but I've been teaching some people at our high school, high school volunteers.

HowStuffWorks: So you're at the point where you want to take your program to the next step. You want to take Prevent the Bite nationwide by bringing in a lot more people from around the country, and teaching them your system, your presentation. Spreading Prevent the Bite. How do you see that working in the future?

Kelly Voigt: We're actually trying to get a video out so we can send it to them. I can't go everywhere. So we're gonna try and teach them over that [the video]. We just want so many people to know about this.

HowStuffWorks: Do you look for anything in particular in people who want to learn your system? Or is it all comers, all takers?

Kelly Voigt: We're just trying to get anybody to send out.

HowStuffWorks: Aside from Prevent the Bite and going to school, what are some of your interests? What do you like to do with your time?

Kelly Voigt: I'm an athlete. I love doing sports, sports is kind of my life. So I do a lot of sports, and I like to hang out with my friends.

HowStuffWorks: What sports do you play?

HowStuffWorks: What are your plans for the future? Do you hope to dedicate yourself to causes like Prevent the Bite? What do you see yourself doing five or tem years from now?

HowStuffWorks: What has bringing your personal message to other children taught you about yourself?

Kelly Voigt: I've learned that, just, going through… something bad has to happen for something good to happen. In my case, just trying to get over my fear. Just working really hard to get something. And just trying, and just expanding what you want.

HowStuffWorks: What is the one thing you want the kids to walk away with after coming to your presentations?

Kelly Voigt: Knowing how to approach a dog. Knowing what to do around dogs. And to not be afraid to try what we've taught them.