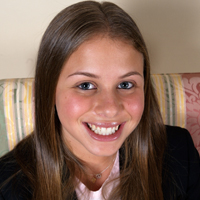 Jennifer Zwilling has been living with Tourette Syndrome all of her life. Diagnosed as a child, it is something that has been omnipresent in everything she does for as long as she can remember. It is a part of who she is. Also omnipresent has been the public's attitudes and misconceptions regarding the disorder. Often times, these misconceptions and ignorance about the nature of Tourette have been harder for Jennifer to deal with than the disorder itself.

So she decided to do something about it.

She began speaking in front of students at school, educating them, lifting the veil of myth that surrounded Tourette Syndrome. Her engagements grew, she became a sought-after presenter, and eventually, she started the National Tourette Syndrome Youth Ambassador Program.

Her presentations challenge the students to break out of the stereotypes, open their minds to the truth, even experience themselves what it might be like to have the disorder. What makes Jennifer's program different is that it's peer-to-peer. She's not some stuffy adult trying to relate; she's one of them -- just a regular, normal young woman who happens to have Tourette Syndrome.

At 16, she was named a BRICK Award Winner in 2007 in the category of Health for her work, and we recently had an opportunity to sit down with Jennifer and talk to her about living with the disorder, reaching out to students, and working to create social acceptance for people suffering from disorders such as hers.

HowStuffWorks: What inspired you to get involved with this cause?

Jen Zwilling: When I was six years old, I was diagnosed with Tourette Syndrome. Seeing how the media portrayed the disorder, and hearing the stories of people I met, and even some of the things that were said to me... You need to understand, there are so many misconceptions and wrong ideas about what the disorder is out there in the media and in the world. And I realized that I had the ability to maybe change that. So that inspired me.

HowStuffWorks: How long was it after you were diagnosed before you decided you would eventually want to do something? Was there something that happened, specifically, that set things in motion?

Jen Zwilling: Tourette’s is such a spectrum disorder, and I am lucky that I don't have such an obvious case of it. In the beginning, it was still scary. I got thrown out of one of my science classes in second grade because the teacher thought I was rolling my eyes at her, when it was a tic.

Jen Zwilling: Motor or vocal involvements, involuntary. So the teacher asked me a question and I guess I rolled my eyes, which was a tic at the time, and the teacher threw me out of the class. So after seeing that, and people asking me questions like, "Why are you blinking your eyes like that?" I became involved in the Long Island Chapter of the Tourette Syndrome Association, and the National Tourette Syndrome Association. I met more and more people whose stories were parallel to mine, except in cases where their tics were more obvious. It really got to them, and it really hurt them. It made them very self-conscious, and really affected their lives. So I thought, wow, as much as I thought it was a problem, it's really so much more of a problem, and something has to be done to change it.

Jen Zwilling: Every year before school started, I would go to my school and talk to the teachers about what Tourette Syndrome is. Then the principal of the elementary school that I went to said, "Why don't you come talk to the kids at the Health Fair, give a presentation to some classes?" And then, in May of 2003, or a little after, I sent a letter to the National Tourette Syndrome Association saying who I was and I had this idea. I think teens learn best from teens, and I wanted to pretty much erase the stereotypes. I outlined my program and they responded wonderfully to it. I went in and I met with the president of the Association. And since then, she's been a big supporter, works with me. It's great.

HowStufffWorks: Now you go from school to school throughout the year, giving presentations to students about your experience living with Tourette Syndrome. How are you generally received?

Jen Zwilling: When I present, I always leave very confident and happy with what I do. I'll tell you a story. There was one little boy who invited me down to the Washington D.C. area, Alexandria, Virginia, to come talk to his school. He was having a hard time, he was in third grade, his name was Matthew. At the end, he came up to me, hugged my legs and said, "Thank you for coming here to make my life better." And when he said that… I never realized how much one person can touch another person. Really have a huge impact on them.

HowStuffWorks: In your presentations, you do an exercise where you have the students act out tics themselves. Where did that idea come from?

Jen Zwilling: There's actually a wonderful woman, Susan Conners, who is the Education Advocacy Chairperson for the National Tourette Syndrome Association. Parts of my curriculum are modeled after hers.

HowStuffWorks: How does it work?

Jen Zwilling: We tell them, "You have 90 seconds to write down the Pledge of Allegiance." And we give them two tics that they have to do. Every time I clap my hands they have to take their pinky and tap it on the table with the hand they're writing with, and after every third word, they have to erase it, ‘cause we also got into recurring disorders. Like obsessive compulsive disorder, these things called tics of the mind, it's the same sort of idea. And they're always very receptive to that. And it's funny, in one class, this girl Shoshanna, actually later in the day they were doing a math lesson and they said, "Oh, can we do what we did this morning? Can we use the tics during this lesson?" ‘cause they were so touched by it. And after, this girl [who has Tourette Syndrome] who was so shy and not confident with who she was, they… the class proclaimed her a hero. Because they couldn't believe that she could do this, with this disorder. And she started to get invited to more of the birthday parties and her life just drastically changed because kids are so eager to accept things once they know what they are.

HowStuffWorks: So your work is about education, but also about creating more of a social acceptance for people with Tourette?

Jen Zwilling: Yeah. I always try to leave with an underlying message. People are all different, and we have to learn to accept differences. Although the program is based around Tourette Syndrome, and I do teach them about what Tourette Syndrome is, it's also about, how can we make people with disorders, or any differences, feel comfortable in an environment that frankly they should feel comfortable in, like school?

HowStuffWorks: What are some of the challenges you've faced while doing this program? And how'd you overcome them?

Jen Zwilling: You know, sometimes it's hard when you're standing in front of a classroom. I have to kinda prove my credibility before they'll really give me a chance and listen to me. People all have their own misconceptions, stereotypes of what people are like. So when I stand up there, you know, I have to figure out a way to really get their attention, hook them in, so they'll listen to me.

HowStuffWorks: What do you do to get them to listen to you?

Jen Zwilling: Sometimes my sister Amanda and my brother Eric will come and help me out, and of the three of us, I'm the only one who has the disorder. So I'll say, "One of us standing up here has Tourette Syndrome. Who is it, and why do you think that?" And, you know, a lot of the times they'll say, oh, it's her because she's shorter. They'll just come up with all these reasons that really make no sense, but looking at us, they don't know who has it. It kind of, like, throws them for a twist, because none of us are standing up there yelling out obscene [phrases]. So it really throws them for a twist. Then after I say, "I, along with many other people all over the world, have Tourette Syndrome," they really listen. They think "Oh, maybe it's not really what I thought it was."

HowStuffWorks: Aside from your work in school, what's an average day for you like? What are your interests?

Jen Zwilling: I'm in 11th Grade now, so a lot of work. I play on my school tennis team and lacrosse team. I'm involved with some clubs in my school. I'm training to be an AIDS peer educator, so I'm also very interested in doing work on educating people about HIV and AIDS and AIDS awareness. I like to be with my friends, you know, have a normal teenage social life.

HowStuffWorks: What are your plans for the future?

Jen Zwilling: Well, I hope to go to a great university. And I'm hoping I'll also do some public-policy type things on the side. I've gone to Washington, D.C. a bunch of times to lobby for certain bills that will help students, help kids in a school setting that have Tourette Syndrome and other disorders. So maybe get more into the public-policy end of it.