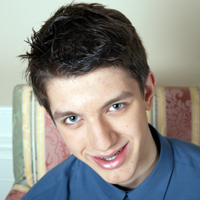 Jacob Komar had always played around with computers: tearing them apart, seeing what made them tick and putting them back together. For him, computers were a natural part of life, something in his home that he almost took for granted. But Jacob soon realized that not everyone had a computer in his home, so he decided to do something about it.

It started simply enough: Jacob found 30 old machines that were destined for the scrap heap. So he took them in. Just like that, Computers for Communities was born.

Jacob refurbished and distributed those computers himself, but since then, Computers for Communities has grown. He has worked with schools, prisons and other organizations to refurbish and distribute over 1,000 machines to people who otherwise wouldn't have one. And Computers for Communities has expanded beyond just delivering the machines: It has embarked on a campaign to teach people how to use them. The organization’s goal is to bridge the Digital Divide, the widening gap in America between people who have a computer and know how to use it, and people who don't, and are therefore being left behind.

Now 14 years old, Jacob was named a BRICK Award Winner for 2007 in the category of Community Building. We sat down with Jacob and asked him about distributing those first machines, bridging the Digital Divide and being a modern-day Santa Claus.

HowStuffWorks: What inspired you to start Computers for Communities?

Jacob Komar: I started Computers for Communities when I was nine. And really, at that time, I had started to work with tearing apart computers and just playing around with old machines that my friends had lying around. So I wanted to be able to do something with that to help people. I knew that there were kids, at least in my local town, and then in other towns surrounding, and then. I realized, all over the word, that don't have computers at home. At that point I couldn't fathom not having a machine at home, I'd been using a machine since I could type on a keyboard, and then mice came along. I started using the mouse. So the computer was such an integral part of my life, that I just couldn't imagine not using a computer.

HowStuffWorks: Was there a single event that got the ball rolling?

Jacob Komar: I found out that a local public school was throwing away 30 old machines just because they were too old for their lab. I jumped into action and said, "I'll take them, fix them up, and give them to kids who can't afford a computer at home."

HowStuffWorks: Once you fixed them up, how do you go about distributing them?

Jacob Komar: When the program started, we contacted social services and asked them for families who were looking for a computer, have small children, things like that. Kids who were especially in elementary school because these are older, slower machines that could run older educational software. That's how, initially, the first 30 machines [were distributed], through Social Services. I would go to their house, set it up [and] teach them how to use it.

HowStuffWorks: Were they expecting you?

Jacob Komar: Yeah, Social Services would contact them and say, "Hey, we have a computer donation, would you like it?" and usually the answer was yes. So we'd plan it out a week in advance, or whatever, we'd go, deliver the machine, and train the kid and parent how to use it.

HowStuffWorks: Do you still go through Social Services?

Jacob Komar: The program's gone through several stages. That was the first part of the program. The second part of the program... I was having kids at the school I was attending at the time refurbish the machines. So you could do a lot more. You could do, like, 100 in a couple months. And the distribution of those machines was through schools. We would send out letters to teachers in elementary schools saying, "Hey, you know your kids. Who doesn't have a computer at home?" Because you can look at statistics of kids who have a computer at home and kids who don't have a computer at home, and the kids who don't have a computer at home don't perform as well in school, especially in areas of math and reading, because these educational software games just provide practice for these kids to do at home. Also, computers provide a way for kids to do research, type up formal papers, things of that nature. So asking teachers we thought was a good fit to find kids.

HowStuffWorks: At what point did the prisons get involved?

Jacob Komar: This past year, the company has really expanded. We have several programs now. One program is the prison project. In 2005 I won the Caring award, and I met someone there who works in South America in a prison. She lives in a cell, just like the inmates, and her goal, she's been there for like 25 years, her goal is to give prisoners hope. And that sort of gave me inspiration. There's a High Security prison about 40 minutes from our office. So we found out that these prisoners, they have jobs at the prison. They could refurbish computers, for us to redistribute to kids. And it's a win-win-win, because the prisoners are gaining IT skills. So when they get out they'll have some sort of skills to do something. As you can imagine, many of these prisoners went into prison in the ‘70s and ‘80s, when a computer was a mainframe in a closet with big reel-to-reel tape-decks. They didn't know what computers are/were, so this sort of provided an opportunity for the prisoners to gain IT skills. So now we have delivery dates where, through Hartford public schools, we will contact the school, they'll go through their list of kids, see who has a computer, who doesn't.

HowStuffWorks: And just like that, the kids get a free computer?

Jacob Komar: The computers aren't free anymore. Up until about a year and a half ago they were completely free. But we found that if people pay a small fee for the computer, feel like they bought it. It's their computer. If they're just given a computer, they can go sell it. They don't have as much passion for the computer because they didn't have to do anything to get it.

HowStuffWorks: How much do you charge for a computer?

Jacob Komar: $40 for an entire machine: computer, monitor, mouse, keyboard. It's affordable for most people, and we do have exceptions for people who just absolutely cannot afford that. But the idea is that it covers our costs -- we have to pay for licensing for Windows and Office, things that we put on the machines, and any spare parts. For instance, if machines don't have modems. They might be donated from a corporation where they don't have modems, they have a network card. So if we have to purchase modems, if we have to purchase more RAM, whatever, that is covered under that cost. So that's one program.

HowStuffWorks: As you are expanding your services, what are you trying to expand into? What do you want to do?

HowStuffWorks: How are you going about that?

Jacob Komar: We just received a $1,000,000 NSF Grant. The program that we set up for this grant is a three-year program that serves 200 inner-city Hartford students, mostly minority. The purpose is to give these kids IT skills for three years through their high school program. It's an after-school program, so they come twice a week, a total of, I think, eight hours a week. And they're trained in networking, computer architecture, software design. It's a pretty high-intense program. This is for the top percentage of kids who are able to handle the program, but don't have the opportunity to do so otherwise. So the idea is that these kids will have the skills so that when they get out of high school, if they can't afford to go to college, they can go get certified, A+ certified, something like that, and they can go get a job. Or it may give them the inspiration to go find a scholarship to go to college.

HowStuffWorks: When did you know that you were doing something special?

Jacob Komar: In that first batch of computers. We went to a kid's house to set up the computer. The moment I walked through the door the kid was like "Oh, this is so cool." As I was leaving he was like, "You know, you're like Santa Claus. Santa Claus just walked through the door." And he said, "Hang on, just hang on a second." And he runs and opens his little chest in his bedroom and pulls out his prized possession, a juice box, and hands it to me and says, "I want you to have this. Thank you so much." I still have that to this day. The memory of that moment. You know, it wasn't much to me, but to this kid, it was the world. So that was my first realization that, wow, this can really, really, really help people.