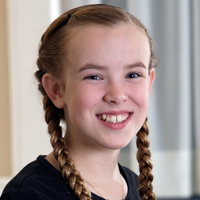 Eleven-year-old Hannah Taylor believes no one should eat out of a garbage can. When she was five, she saw someone doing just that -- the first homeless person she'd ever seen -- and her passion was born. Soon after, she started the Ladybug Foundation, an organization dedicated to doing all it can to help put an end to homelessness.

She has traveled throughout her native Canada speaking and presenting, spreading her message of hope and need to thousands of people. She also hosts Big Bosses lunches, where she meets with leaders of the business community and convinces them to pitch in with the effort. To date, the Ladybug Foundation has helped raise over one million dollars. Much of the money Hannah raises comes from her Ladybug jars -- red jars painted to look like ladybugs that pop up across Canada during "Make Change" month to collect people's spare change.

In 2007, she was named a BRICK Award winner in the category of Community Building. We caught up with her and asked her about why she started the Ladybug Foundation, the challenges of traveling and speaking as an 11-year-old, and what she hopes to accomplish in the years ahead.

HowStuffWorks: You first became interested in homeless and doing something about it at the age of five. How did you get the desire, and where did you get the drive, to start something like the Ladybug Foundation at such a young age?

Hannah Taylor: What first happened was that I saw the first homeless person I'd ever seen in my life. We were driving down a back lane, and I saw him, and he was eating out of a garbage can. I asked my mom what he was doing, and why he was doing it, because it was the first time I'd ever seen a homeless person. And she gently told me that the man's homeless, and they do what they have to do to eat. So after a year of worrying about this and asking questions about homelessness, my mom finally told me, "Well Hannah, maybe if you do something about it, maybe your heart won't feel so bad." So I went to my grade one teacher the next day, and I asked her if I could talk to the class about what I understand about homelessness, and what we could do to help. So I did speak to my class, and we ended up having a bake and art sale, and giving all the proceeds and clothes and stuff to a local mission. And it got bigger from there.

HowStuffWorks: What is it about the Ladybug that made you decide to call your organization the Ladybug Foundation?

HowStuffWorks: How do the Ladybug jars work, and where did that idea come from?

Hannah Taylor: When I first thought that we needed to collect money, I'd been seeing tins, you know, little cans, around for the Humane Society and stuff. And I was thinking that I don't have cans, but I have a lot of baby food jars, because my little sister was eating baby food then. So my mom spray-painted the jars red, and it looked like our garage had chicken pox, and my bike was turned pink, and so was half my dad's car. And then we made the ladybugs on them. So now, because my sister doesn't eat baby food anymore, a company supplies them for us, and spray-paints them, and then we do the ladybugs on them.

HowStuffWorks: And then how do you distribute your jars?

Hannah Taylor: We have a "Make Change" month, and that's when we give out the jars. And we give them out to businesses and schools that would like them. And then they fill up with extra change, what anyone has.

HowStuffWorks: And then what do you do with the proceeds? Do you have a charity that you give them to, or do you distribute them yourself?

Hannah Taylor: Well, we have a few missions and organizations that we support, and we give their share of the money to them. And they decide what to do with it.

HowStuffWorks: You do a lot of speaking engagements all across Canada. How do you manage to do that and still keep up with your schoolwork?

Hannah Taylor: To be honest, I don't miss as much school as I'd like to. But when I do miss school, I get the work that I'm going to miss done before I leave.

HowStuffWorks: And your teachers, everyone, they know what you're doing and they're all very supportive of you?

Hannah Taylor: Yeah, but still my parents… I can't miss too much school.

HowStuffWorks: Where did the idea for the Big Bosses lunch come from?

Hannah Taylor: When I was little, I thought my dad was a big boss downtown. Like the big, big, big boss downtown. But as I grew older, I discovered that my dad isn't the biggest boss. And there must be more big bosses downtown. So I started taking big bosses in Winnipeg out to lunch, one at a time. And then one day, after having [a lunch with a big boss], I came home frustrated and said to my Mom, "It would be so much easier if I could get them all together, give them juice and a sandwich, and talk about the Ladybug Foundation." Because one big boss can make a difference, but lots of big bosses can make an even bigger difference. So that's how the Big Bosses lunches came to be. And for the first one I sold pictures, I drew 50 pictures, and then I sold them at an auction to raise money. And actually two men had a bidding war and it went up to $10,000. For this little picture of a ladybug.

HowStuffWorks: Do all the big bosses want to come to your lunches? How do they find out about it?

Hannah Taylor: We invite them. And Richardson Financial in Winnipeg has really helped us out because they, like, plan a lot of it now. And it's easier on us because it's hard to get a place and all. So we've done it in Winnipeg, and Toronto, and Edmonton, and Calgary. And Edmonton and Calgary were on the same day. It was crazy. But it was still fun.

HowStuffWorks: What can you tell us about Hannah's Place?

Hannah Taylor: Hannah's Place is an emergency shelter, part of a shelter, in Winnipeg. I was very honored to have it named after me. I actually got to put my handprints in the cement and write my name in the cement. And what they're doing, it's an emergency shelter, and there's one part for youth, one part for men, and one part for women and children. It's really, really neat because it's a place where there're lots and lots of beds, and homeless people can come and sleep overnight. Because Winnipeg is, like, the coldest capital in the world, and they need a place to stay.

HowStuffWorks: You've formed friendships with some of the homeless people in your area. How did you meet these people, and what is your relationship like with them now?

Hannah Taylor: They all have an individual story. I meet them on the street. They say hello to me. They kinda have to talk to me first, so it's comfortable for both of us, and then I talk, and we get to know each other.

Hannah Taylor: They know a bit about it, yeah.

HowStuffWorks: How do they feel about it?

Hannah Taylor: They think it's great. They're very thankful about what I, and the people who are helping me, are doing.

HowStuffWorks: What challenges have you had to overcome in your work with the Ladybug Foundation?

Hannah Taylor: When I travel to speak, the biggest problem is I get really homesick. ‘Cause I miss my little sister. And each parent doesn’t come with me, it's usually one or the other. And my grandma, my grandma's sometimes at home.

HowStuffWorks: What advice do you have for young people, maybe not as young as you, who want to do something about homelessness but are overwhelmed by the size of the problem?

Hannah Taylor: Just follow your heart. Tell your parents about what you're doing, or what you want to do, and they might give you some ideas, too. But really, just follow your heart, and maybe get your schoolmates involved so they can help out, too.

Hannah Taylor: Well usually I only speak, like, three times a month. But Ladybug stuff runs all through the month, all the times of the year. So a normal Ladybug Foundation day would be speaking to a school, or doing a conference in the morning in Winnipeg, and then going to school in the afternoon, then coming home and doing my homework. I usually fly in the night before, then I speak that day and fly out that night, so it's only a day, usually. But then a normal day for me is just going to school, hanging out with friends, drawing.

HowStuffWorks: What are some other interests of yours aside from the Ladybug Foundation?

Hannah Taylor: I love to play with clay, and I like making figurines. And what else? I love to write, and I love to draw. I also like to read.

HowStuffWorks: What do you see for yourself in the future?

HowStuffWorks: Well, your life! You're only 11. Do you have any ideas?

Hannah Taylor: I have lots of ideas. The Prime Minister of Canada. A marine biologist working with belugas in Vancouver. Dog breeder. An oceanographer, an archeologist, or a robotics engineer.

HowStuffWorks: That sounds great. I guarantee you'll hit one of those.

Hannah Taylor: And an author through all of that.

HowStuffWorks: You'll do them all, then end up as Prime Minister and write your memoirs.