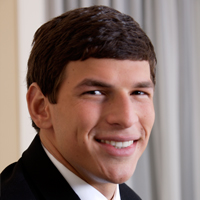 David Fajgenbaum lost his mother to brain cancer in 2004, while he was a sophomore at Georgetown University. Her passing was devastating, but in his loss, David found inspiration. He quickly discovered that many of his fellow Georgetown students were also suffering the loss of a loved one in silence. So David created a small support group to get people together to talk about their loss. This was the beginning of Students of Ailing Mothers and Fathers (AMF).

AMF started with just 10 of David's peers, but the group quickly spread into a support network of more than 400 members of the Georgetown community. He soon realized that students all over the country are going through the same loss, all the time. It is estimated that between 35 percent and 48 percent of all college students are grieving the loss of someone who passed away within the last 24 months. So David expanded Students of AMF into the National Students of Ailing Mothers and Fathers Support Network in April of 2006.

The response has been overwhelming, with chapters sprouting up across the country. Losing a family member or someone close to you is always hard, and it can be especially difficult when you're away at college, often the first time you've been away from home. National Students of AMF works to give every grieving student the support he or she needs to keep going, stay in school, and deal with their personal tragedies. Because as David has discovered, people want to get involved; they want to help each other. No one needs to be alone.

In 2007, David, 21, was named a BRICK Award Winner in the category of Health. We recently had a chance to catch up with David and ask him about the creation of AMF, the effect of losing a loved one, and what the future holds in store for him.

HowStuffWorks: Your mother passed away from brain cancer while you were away at school. Was the timing of her death -- you being away from home -- what motivated you to start National Students of AMF?

David Fajgenbaum: Yes, absolutely. The timing of it, not being home with the loved one. [College] is the first time in your life when you're trying to gain autonomy from your family. It's a time of maturity. Especially since when you're in your twenties, your parents are in their fifties and sixties. Terminal illness is starting to set in. It's a unique age, and [the death of a loved one] happens quite often.

HowStuffWorks: Your personal experience led to the initial idea for the support groups. What led you to make the leap from a small support group of friends to creating a large foundation?

David Fajgenbaum: It was really based on need. The reason we started at Georgetown was strictly because there was this need at Georgetown. There was nothing there. When I saw the response, all of a sudden we really didn't look anywhere else. People started coming to me from other schools, from Duke and UNC, all over the place, saying we wanna start chapters. So once people came to me, I did some literature reviews to find out what the statistics on this kind of stuff was. I found out that there's a huge number of college students that have lost a loved one and that are really struggling with it. Their grades are declining, they're dropping out of school, they're having psychological disorders because of it. So I realized this is a much larger issue than Georgetown, we need to get it to other places. That's when we decided to start the National Students of AMF network. Through that, we can not only facilitate the spread of campus chapters, we can also provide direct support from the network online through e-support.

HowStuffWorks: If someone else in another school, going through this, wants to do something, what is your advice to him or her?

HowStuffWorks: What if they don't want to start a chapter, but they need help?

David Fajgenbaum: Really, advice for someone going through the loss is just reach out to your friends. If someone offers to provide you with some support and a shoulder to lean on, go to them and take that support. It's not selfish, it's what you need. You're at a tough stage in your life, and you're going through something that's incredibly difficult. That's why starting a chapter is so great, because you actually bring people together. The number one complaint that people used to say to me before we started the group was, "I feel alone." And based on the fact that between 35 and 48 percent of college students have lost a loved one in the last two years, you're not alone. You think you're alone because no one talks about it. You're in college, you don't want to share this kind of stuff with other people. But there're hundreds of other people on your campus that you can talk to that have gone through the same experience. But you have to have a reason to open your mouth, and that's where AMF comes in.

HowStuffWorks: After your own mother passed away, did you find your grades suffering, your social life suffering?

David Fajgenbaum: I think I was fortunate because I was a member of the football team, so I had a hundred guys who were my support network. I was also close enough to home that I could drive home every weekend. That was part of my deal with my mom. She said "I really want you to go to school." Because I had to decide, go to school or stay at home. I said the only way I'll do that is if I can come home every weekend. So I went home almost every weekend for that year and a half, and that was really helpful for me. Also, because I'd made the decision to go to college instead of staying at home, I said if I'm not gonna be home and take care of my mom, I'm gonna go and work really hard. So for me, my grades didn't suffer.

HowStuffWorks: You found inspiration from your situation?

David Fajgenbaum: Also, knowing that I want to go into medicine, I felt that every minute that I was putting into studying, I was getting closer to taking care of someone like my mom.

HowStuffWorks: You're studying to be a doctor. What is your specialty?

HowStuffWorks: How involved are you on a day-to-day basis with National Students of AMF?

David Fajgenbaum: I'm the executive director, so I run it. I also run the board. So this past Wednesday, we had our board meeting and I had to actually convince them to let me continue to run it, even from Oxford, from England. With this day and age of communication, it doesn't matter where you are.

HowStuffWorks: Do you see yourself always running National Students of AMF?

David Fajgenbaum: I see myself hopefully working really hard with it for the next three or four years and growing to where I can actually hand it to someone else and feel OK with it, and stay on the board, and always look over it from the board. But I see this as something that will go on forever because of the need. It's something that someone else can run.

HowStuffWorks: How important is it for this organization to be run by college students?

David Fajgenbaum: We're gonna make sure that the person running it will always be in college or just out of college, because you need to understand the demographics and the type of people who are involved. Also, I think it'll be important for the Board of Mental Health Professionals to always have experienced professionals who understand the science behind it.

HowStuffWorks: What do they do for you guys?

David Fajgenbaum: The Board of Mental Health Professionals is an advisory board, so they look it over every time we do a program. They make sure that, you know, what we're gonna be going over doesn't cross over into the realm of therapy, that it stays within social support. We have a guide that we give to people who run support groups, and they make sure that guide, you know, fits in the realm it should. They give advice, and make sure that everything we do is sound, and we're providing the best support we can.

HowStuffWorks: What are some of the more memorable moments you've experienced with this project?

David Fajgenbaum: When people come to me and share with me what it's meant. One, in particular, kind of hit me. We pass around a journal. And people can write in it after different events. We'd just done an event in memory… actually in honor, he's still around… [of] a girl's dad. He has ALS, and we did an ALS walk. And she said that "The day my dad was diagnosed with ALS, my life changed. And the day I met all of you guys, it changed also." Just to hear that really took me back. This organization really is helping people. It's really making an impact. It's not making them go from OK to good, it's taking them from really, really, really low to OK, and then hopefully to good.

HowStuffWorks: What have you learned about people through your work with AMF?

David Fajgenbaum: I've learned that people want to get involved. You just need to give them a direction. And one thing we do with AMF is, in addition to providing support, we also understand that there is so much passion and so much energy behind these students that have lost loved ones. So what we've realized is that if we can just channel this energy, this grief, this emotion, towards positive outlets, like service projects, like raising money for different events, we can really make a huge impact.