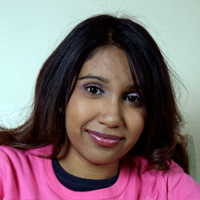 Cheryl Perera began speaking about the horrors of child sexual exploitation and sexual tourism in high school at the age of 16, after reading about it for a school project. Soon after, she traveled to Sri Lanka, where she went undercover as a decoy in a sting to nab a pedophile. There, she was able to talk to the children themselves, hear their stories. When she asked them how she could help, they responded, "Tell my story."

Upon her return, she vowed to do just that. She mobilized the Canadian Travel and Tourism Industry to get involved in the fight against Child Sex Tourism, and she started OneChild Network and Support Systems Inc., an organization created and run by young people dedicated to ending the commercial sexual exploitation of children around the world. They made an in-flight video for Air Canada that warns all outbound international passengers against child sexual tourism. This video is seen by over 400,000 people a month.

Cheryl's passion and inspiration have touched more than 20,000 young people as she's traveled the world, speaking out for the protection of children. The problem of child sexual exploitation is world-wide, and if young people around the globe, working with the model Cheryl created with OneChild, get involved in working to end child sex trafficking and tourism, they can make a difference.

In 2007, at the age of 21, Cheryl was named a BRICK Award Winner in the category of Global Impact. We recently had a chance to sit down with Cheryl and ask her about her work, traveling across the world to catch a pedophile, and about the future of One Child.

HowStuffWorks: You got the idea to start OneChild while doing research on child exploitation for a school project. What was it about this research that inspired you to become a children's rights activist?

Cheryl Perera: I think essentially it was just reading about this issue and just being so angry and sad about it, and being so frustrated. I had never heard about the issue and I just couldn't fathom anything like that. I basically compared my life with the lives of these children, and the differences were so astounding. So that is what really moved me. And the book that I was reading was about a 12 year-old boy who had learned about child labor and had taken action on it, so I felt really inspired to actually do something about it.

HowStuffWorks: This problem is so vast, it boggles the mind. It seems like something from a made-for-TV movie. How do you get people's attention, get them to see the reality of the situation?

Cheryl Perera: By bringing it back to them. This is an issue where our own people have a stake in it. It's our own people who do go overseas and sexually abuse children. These children are being forced into prostitution. It's being fed by the demand of sex tourists who are coming from our countries. So I think just bringing it back to them and showing them that, yeah, our own people, our own nationals, are doing this. As a citizen of this country, you have a responsibility to do something.

HowStuffWorks: Speaking of doing something, where did you get the courage to do what you did in Sri Lanka? Act as a decoy? What was that like?

Cheryl Perera: I think it was a mix of passion, wanting to learn, and to bring an experience back to tell to others. Because prior to Sri Lanka I would give these speeches and kids would raise their hands and say, "Well, have you ever met these children? What gives you the authority to speak on their behalf?" And I thought the best way I can understand this is to speak to the kids, and yes, it's a stupid idea, but maybe to go undercover if I can. When I was thinking of going undercover, I was thinking, you know, a person standing on the street, observing the undercover operation. Not to be the decoy. But then I spoke with the National Child Protection Authority.

HowStuffWorks: They set you up with a whole other identity, and they knew of people on the Internet who would be searching for someone like you, and they hooked it up?

Cheryl Perera: I was playing a 15-year-old girl. They had been tracking someone on the Internet. These people will go on child pornography sites, and they will post messages saying, "I'm interested in a girl of this age, or a boy of this age." And you may have the children, or you may have the pimps who go on and offer these children. They set up a place, a time to meet. If they like the way they look, then they go to a hotel. So the police had already built up that rapport with that person, the perpetrator, and they needed someone to come in and act that initial meeting.

HowStuffWorks: Did you actually have to go with him to a hotel room in order to the get the arrest?

Cheryl Perera: Well, no. The idea was, if he liked the way I looked, then we would go to a hotel. So we ended up meeting, and we talked for about an hour. I had a spy camera rolling and all that stuff. So I was able to get his confession, basically, on tape. I was asking him what interested him and he would talk in very graphic detail. And then the idea was that as we get up to go to the hotel, then the police come in.

HowStuffWorks: This guy that you caught, what was he like? Just a normal guy in Sri Lanka? Or was he obviously kind of weird?

Cheryl Perera: He was a first-time pedophile. He was very nervous, I found him. He was very wary of what was going around. And he was pretty high up in the community. He was married with two kids.

HowStuffWorks: So he knew what he was doing was wrong.

HowStuffWorks: And he's just finally giving in to his temptation.

HowStuffWorks: Let's leave the perpetrators now and talk about the victims. You've talked to a lot of children caught in this web. When you ask them, "What can I do to help?" They say, "Tell my story." What does that accomplish?

Cheryl Perera: I think stories are what really pull people in. It puts a human face to an issue. Sex tourism, for example, isn't as predominant (here) as it is in other parts of the world. So people find it hard to connect, to see the issue. So when you tell stories, it puts a face to it. A human touch.

HowStuffWorks: You're working with the Canadian Tourism Board and the travel and tourism industry. How did that relationship come about?

Cheryl Perera: It came about as a result of my trip to Sri Lanka. I really wanted to mobilize young people to take action. So I was doing research, and I learned about initiatives where airlines were partnering with non-profits to screen in-flight videos that warn about sex tourism. And I thought, that's a great idea, let's approach Air Canada, because nothing has been done in Canada. Let's do that, and let's have young people be at the heart and center of it. So it came to the point where I thought, this is a good idea, but I don't know anybody at Air Canada. And I tried to use, you know, creativity, and really use our greatest asset, which was our youth, and our energy, and enthusiasm to our advantage. So I created a letter of support. And it would tell people about my experiences, and they would say, "OK, how can I help?" And I'd say, "Get involved with this initiative. Take this letter of support and circle it around, and get young people under the age of 25 to sign it. It's an appeal to Air Canada." And it ended up, I met with one of our members of Parliament, who connected me with the person who deals with government relations with Air Canada, who connected me to the right person at Air Canada.

HowStuffWorks: OneChild is specifically about young people reaching out. As you yourself get older -- you're now 21 -- do you see yourself stepping away? Do you have people younger than you ready to take over?

Cheryl Perera: Yeah. Our youth advisory council is made up of kids between the ages of 13 and 23. The point of this organization, it's not only youth-driven. It's youth-run. We have a Board of Directors over the age of 18 who deal with financial and legal issues. That's it. The Youth Advisory Council deals with everything else. The policies, the campaigns, the projects. Everything. I think real leadership is about also planting the seed in other people. That's the point of OneChild. It's not for me to continue this as a one-person thing, it's to inspire action in other people.

HowStuffWorks: So in five years, when people who are five, 10 years younger than you are running OneChild, what are you doing?

HowStuffWorks: What's the best part, for you, of working with OneChild? What do you find most rewarding?

Cheryl Perera: The best part would be, to give you a concrete example, the Air Canada initiative. We just felt so good because it was such a task. We had no budget to make a video. Air Canada popped the question to us on the phone, and said, "Well do you guys have a video?" And we said, "Well, we can make one in a week." And it was a home video camera. It was myself, friends and family, dressing up as sex tourists and child prostitutes. And taking pictures in the back of an alleyway.

HowStuffWorks: What is the future of OneChild? Where is it going?

Cheryl Perera: I'd like it to definitely expand into other countries. We've got our base in Canada, we're slowly growing into the States. But it would be nice for it to grow to Europe, and to other regions of the world, where the locals are doing it as well.

HowStuffWorks: Like a franchise. You want to create little OneChilds everywhere.