History of the Debt Ceiling 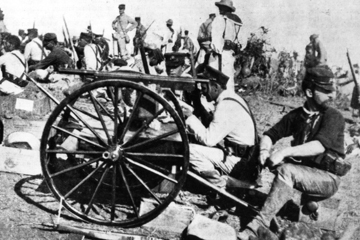 Camp McCalla in Guantanamo Bay, Cuba, during the Spanish-American War. The War Revenue Act of 1898 helped fund this war and represented the first time the Treasury could borrow up to a fixed ceiling.
Hulton Archive/Getty Images

When the United States was younger, Congress held a much tighter grip on the national "credit card." In most cases, the Treasury could not sell securities — aka borrow money — without explicit approval of Congress. When the Treasury needed to borrow money, Congress determined what types of securities to sell — short-term or long-term — how many, and at what interest rates [source: Austin and Levit].

Strict congressional oversight was lifted temporarily during times of war. The War Revenue Act of 1898, for example, gave the Treasury flexibility to borrow up to $500 million by selling a combination of short- and longer-term securities. This money was used to fund the Spanish-American War and represented the first time that the Treasury could freely borrow up to a fixed limit or debt ceiling.

The First and Second Liberty Bond Acts of 1917 set similar debt limits to help fund the U.S. entry into World War I [source: Austin and Levit]. Gradually, the Treasury was given more and more freedom to determine which securities would generate the most revenue for the least amount of interest.

In the 1920s and 1930s, Treasury Secretaries Andrew Mellon and Henry Morgenthau argued for even more flexibility to manage the nation's debt. In 1939, Morgenthau and President Franklin Roosevelt convinced Congress to create the first aggregate debt limit, meaning a debt ceiling that covered all federal debt [source: Austin and Levit]. As long as the Treasury stayed below that debt limit, it was free to borrow as it saw fit to pay the country's bills on time.

This was the birth of the debt ceiling as we know it. Under this arrangement, Congress approves spending bills and the Treasury figures out how to pay for them. Treasury is allowed to borrow up to the debt ceiling without asking Congress for permission to borrow more. But every so often, Treasury bumps up against the ceiling, and Congress must vote to raise it. Since 1960, Congress has voted to raise the debt ceiling 78 times [source: Sherter].

In recent years, some congressmen and women have threatened to block passage of debt ceiling increases unless cuts were made to government spending. To understand why these threats are so politically powerful, let's look at the potential damage to both the U.S. and global economy if Congress failed to raise the debt ceiling.