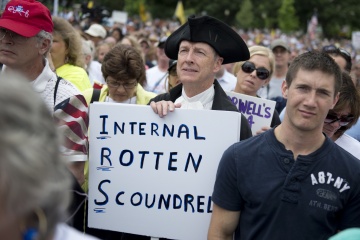 Members of the so-called Tea Party were none too pleased when the IRS admitted it was looking particularly closely at their political groups and donations.
SAUL LOEB/AFP/Getty Images

In 2013, campaign finance reform activists and consumer advocate groups proposed that the Securities and Exchange Commission (SEC) should force corporations to inform shareholders of their donations to political and nonprofit organizations. The proposal received an unprecedented 600,000 comments from the public, the majority in favor of it. If enacted, the proposal would mirror a similar rule that requires labor unions to disclose their contributions to politicians, political groups and nonprofits. However, without comment, the SEC dropped the proposal from its 2014 agenda [source: Blumenthal].

Organizations with 501(c)(4) status aren't supposed to be able to empty their coffers into campaigns. There's actually a rule that says they're not allowed to use more than half their resources to fund political activities. The problem is, that rule is really hard to enforce. The Internal Revenue Service decided to give enforcement a go, but they got their knuckles seriously rapped by Congressional Republicans as a result. They were accused of partisan targeting of conservative nonprofits. While a Department of Justice inquiry found no criminal wrongdoing, the chastened agency was reprimanded for "poor judgment" [source: Watson].

In 2013 a Treasury Inspector General report suggested that the IRS elucidate its rules about what constitutes political activity in order to shed some light on dark money. But when the agency tried to do so, congressional Republicans blocked the effort in a rider attached to an omnibus spending bill in December 2015 [source: Watson]. Another rider in the same bill prevented the SEC from forcing corporations to reveal their donations to shareholders [source: O'Donnell].

Individual shareholders have been submitting private requests for information about political contributions to large public companies, and in some cases, the corporations have voluntarily obliged. With all efforts to get the government to police dark money so far stymied, perhaps this is the way forward for now [source: O'Donnell].

One argument that shareholders might use is that too much in the way of campaign contributions and political lobbying can be bad for business. When companies seek political favors, they engage in a behavior known as rent-seeking. In a nutshell, this means they're trying to get a piece of the existing pie rather than concentrating on making the pie bigger or making other pies (i.e., creating wealth). If rent-seeking turns out to be a successful strategy for companies in general, and nobody's creating wealth, this could result in a stagnating economy [source: Craig and Madland]. Shedding some light on the sources of dark money might help prevent that gloomy fate.

I've got a great way to put a stop to all this partisan whatnot — let's go back to the source: Athenian democracy. Ancient Athenians used a system called sortition to select government officers. Basically this meant that all citizens over 30 could put their names forward for selection from a lottery machine. Government by lottery! No more campaigns, no more campaign contributions and no more dark money. The only risk would be that your Aunt Hilda could end up being President. But is that really so bad?