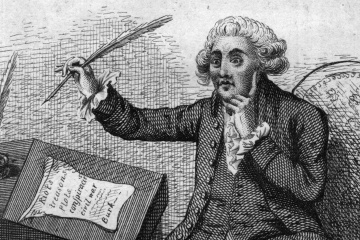 It's doubtful Thomas Paine had dark money in mind when he was brainstorming "Common Sense."
Hulton Archive/Getty Images

In the 2012 campaign cycle, almost 9 of every 10 ads funded by dark money were negative and the Annenberg Public Policy Center determined that 26 percent of them were misleading. Ads paid for by organizations that disclose their donor lists were often deceptive too, but at a slightly lower rate than dark money spots [source: Scherer].

So does dark money threaten to corrupt U.S. politics? There's been a lot of hand wringing about dark money, especially from the left. One could easily argue that liberals are just mad because they're getting seriously outspent. But is there any merit to the concerns that have been raised?

The general argument goes something like this: Big money has a significant influence on politicians. If those proffering the big money are not required to disclose their identities, then their influence is potent but secretive. In other words, the general public has no way of knowing who helped get a politician elected nor what they want in return for their generosity.

Others have argued that there is no linear relationship between the amount of money raised and a successful campaign. Many candidates have raised massive sums of money only to drop out of primaries or ultimately lose an election. In recent memory, Texas Sen. Phil Gramm, former New York City Mayor Rudolph Giuliani and former Vermont Gov. Howard Dean all spent many millions before dropping out of presidential primary races [source: Dubner].

If money doesn't guarantee a win, it's tempting to ask why not simply ban campaign contributions altogether? The general answer is that political campaigns are expensive — when you need to reach hundreds of millions of potential voters, you need major funds to get your message out.

Those who oppose dark money aren't necessarily against campaign financing; they're arguing for transparency. Actually, in its controversial Citizens United ruling, the Supreme Court agreed, writing, "transparency enables the electorate to make informed decisions and give proper weight to different speakers and messages." It would seem that dark money wasn't an intended consequence of the ruling [source: Beckel].

But not everybody agrees. Pointing out that Thomas Paine's "Common Sense," in addition to "The Federalist Papers," were first published anonymously, some have argued that anonymity is a vital part of speaking truth to power and that transparency could put a chill on free speech. If donors are required to disclose their identities, they might fear a backlash [source: Beckel]. Of course, this argument presupposes that speech can be equated with money, which is itself the contested notion at the core of the Citizens United decision. Is writing an anonymous check for millions of dollars the same as keeping your name off the byline of a political manifesto? Not exactly, but it takes money to disseminate the manifesto, and in that sense some might argue that money and speech are, if not synonymous, closely linked.

Still, the First Amendment guarantees the right to free speech, not the right to broadcast it to the widest possible audience. It seems hard to get around the fact that if nothing is done about dark money, those with the deepest pockets will have more secretive influence than those who don't. Is that a problem? If your answer to that is "no, that's the way the world works," then dark money probably doesn't really bother you. If it's "yes," read on to find out what's being done to curb dark money spending.