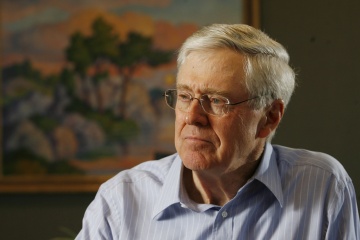 Charles Koch -- who, along with his brother David, makes up one half of the wealthy "Koch brothers" -- is the billionaire CEO of Koch Industries.
Bo Rader/Wichita Eagle/MCT via Getty Images

Other left-of-center nonprofits are also politically active. Examples include the League of Conservation Voters, Patriot Majority USA and Planned Parenthood. In the 2012 election cycle, for instance, Patriot Majority USA received more than $2 million from labor unions. In all, the group raised enough anonymously donated funds to funnel more than $7 million into campaigns for the presidency, the Senate and the House [source: Blumenthal].

But while liberals make use of the dark money loophole, they can't match conservatives for sheer volume. During the same 2012 election cycle, 83 percent of anonymous spending was deployed against Democrats [source: Scherer]. Founded by billionaire conservative activists the Koch brothers, Americans for Prosperity was a big spender ($36 million), as was Crossroads GPS ($71 million), the organization created by Karl Rove, George W. Bush's former chief political strategist. The U.S. Chamber of Commerce was no slouch either ($35 million). Remember them from that little statute in the Underwood Tariff Act of 1913? They were really thinking ahead!

But those numbers will likely be dwarfed in short order. As of November 2015, the amount of dark money spent in the run-up to the 2016 election was already more than 10 times the amount spent during the same period in the previous election. During the 2012 cycle, the dark money tally topped out at $308 million [source: Kertscher]. So if things keep up, the anonymous spending total for the 2016 election could number in the billions.