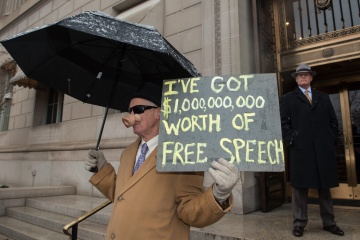 A demonstrator holds a sign outside the U.S. Chamber of Commerce during a rally against the Supreme Court's decision in favor of Citizens United, which allows private citizens and corporations to make unlimited donations for political campaigns.
NICHOLAS KAMM/AFP/Getty Images

The year was 1988. That fall Vice President George Bush Sr. was battling Massachusetts Gov. Michael Dukakis for the U.S. presidency. Dukakis was doing well. He had a strong economic record in the form of the so-called "Massachusetts Miracle" of the 1980s.

Then on Sept. 21, an ad called "Weekend Passes" began appearing on televisions across the country. It stated that while George Bush supported the death penalty, Dukakis not only opposed it, he also supported weekend furloughs for convicted murderers. This was actually a policy Dukakis inherited from his Republican predecessor and one that the governor also ended. But the ad told a simple and devastating story about a convicted murderer named Willie Horton who, on one of these "weekend passes," stabbed a man repeatedly and raped his girlfriend.

The ad, later seen as a crucial turning point in the campaign, marked the beginning of the end for Dukakis's presidential bid. Many viewed "Weekend Passes" as a particularly virulent form of negative advertising and "dirty tricks" campaigning. It came under intense criticism for, among other things, allegedly exploiting racist attitudes toward African-American criminals. The Bush campaign, however, was able to officially disavow the ad since it was funded by an outside group called the National Security Political Action Committee (NSPAC). The NSPAC, headed by former Joint Chiefs of Staff Chairman Thomas Moorer, supported Bush's campaign without being formally linked to it [source: Kamber].

Fast forward to the election season of 2012. Sal Pace, a Democratic candidate for the Colorado House of Representatives, is quietly sitting in a pew at a Catholic church in his home county of Pueblo when a 10-year-old girl approaches him and asks whether he's really trying to cut her grandmother's Medicare. The heavy cuts to Medicare actually had bipartisan support and had no direct effect on patients' care, but Democrats around the country were getting the blame thanks to a barrage of TV ads.

Americans for Tax Reform, the organization funding the ads, was designated as a nonprofit — unlike a political action committee (PAC). That means it wasn't legally required to disclose its donor list [source: Scherer]. And because the funds used in those political ads had anonymous sources, they're known as "dark money." 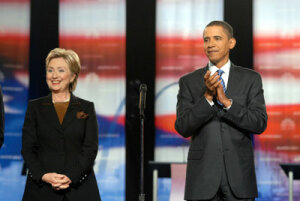 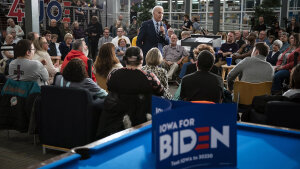 What&rsquo;s the difference between a caucus and a primary?