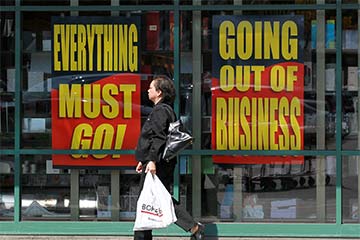 A Borders Books customer walks by signs advertising a going-out-of-business sale at a Borders bookstore on July 22, 2011 in San Francisco. Borders filed for Chapter 11 bankruptcy in February of that year.
Justin Sullivan/Getty Images

"Bankrupt" is one of those words that gets thrown around all the time, often by folks who might not know what it actually means. Politicians are called morally bankrupt. Detroit went bankrupt. Even French indie rockers Phoenix released an album called "Bankrupt!" in 2013. In truth, bankruptcy has a very specific legal meaning. It's an important tool for people and businesses that essentially owe more money than they have.

That's right, people or companies whose poor life, financial and/or business decisions leave them in hot water can dig out from the financial wreckage. Usually, the bankruptcy process lets them to do it without paying all of what's owed. The idea is that bankruptcy allows a debtor in over his or her head to get a fresh start – of sorts – while also ensuring that creditors get at least some of the money they deserve.

Some might say that luxury real estate mogul and talking hairpiece Donald Trump is the human embodiment of bankruptcy. What we do know is that Trump's businesses have relied heavily on the legal process over the years, even to an extent where The Donald has been accused of gaming the system. The multibillionaire has filed for corporate bankruptcy four separate times since 1991, claiming each time that his Atlantic City properties were worth less than what his companies owed on them and that business revenue and assets weren't enough to cover debts. That's helped him wipe out most of those obligations – without having to dig into his own substantial personal wealth – and start over again [source: O'Connor]. (Note: Trump reportedly isn't involved in the two AC properties that filed for Chapter 11 in 2014).

"Laws are like cobwebs, which may catch small flies, but let wasps and hornets break through," author Jonathan Swift once said. Mr. Swift: meet Mr. Trump.

Like prairie animals, farm stand produce and failed Trump properties, bankruptcies come in many shapes and sizes. For corporations, there are two main paths out of debt. The one that a company chooses determines what happens to the business after the arears are wiped away.

A business whose debt is greater than its assets has two options when filing for bankruptcy: Chapter 7 and Chapter 11. Companies file for bankruptcy in federal court, asking the court to freeze all of the business's outstanding debts, approve a plan to pay down those obligations and ultimately absolve its responsibility for some of the remaining money owed. The court then notifies creditors of the bankruptcy proceeding, orders them not try to collect the debt and tells them to get in line for payment by filing certain documents with the court [source: Justina].

Bankruptcies proceed under federal law and the different variations of the process are named for the chapter of the federal banking code under which they were enacted. For businesses, the choice depends on whether the company wants to continue operating or simply wants its creditors to call off the dogs so that the business can wind down in peace [source: SEC].

A business can seek Chapter 7 bankruptcy only if it immediately ceases all operations. Often referred to as "liquidation," this type of bankruptcy is a popular option for sole proprietors and small business owners. It allows them to get out without losing any of their personal money or assets, unless those assets were put up as collateral for a business debt like a loan or mortgage [sources: SEC, U.S. Courts].

Chapter 11 bankruptcy, on the other hand, is often referred to as "reorganization" because the process lets a business climb out of suffocating debt and tinker with its setup while continuing to operate. Although the company's management continues to run the show on a day-to-day basis, all significant business decisions have to be approved by a bankruptcy court. The business has to file a plan with the court, detailing how it will pay creditors and in what order. It can also restructure its finances and consolidate operations – getting out of burdensome contracts or scaling down production -- in an attempt to avoid future financial troubles [source: SEC].

Other Chapters in the Code

While Chapters 7, 11 and 13 are the most popular, they aren't the only bankruptcy options out there. You can also file Chapter 9 (for municipalities), Chapter 12 (for farmers and fishermen), and Chapter 15 (for people who have cross-border insolvency – i.e., they're broke both in the U.S. as well as a foreign country). All the numbers correspond to chapters in the federal bankruptcy code that describe them [source: U.S. Courts].

The Bankruptcy Process and Aftermath

For creditors and investors, the bankruptcy process all boils down to one important question: "When will I get paid?" The answer depends largely on the type of debt or investment.

In both Chapter 7 and Chapter 11 cases, the settling of debts is overseen by a trustee. This person's role varies based on the type of bankruptcy, but generally includes seeing that the business's assets – buildings, equipment, supplies, products – are sold off in a timely fashion and that creditors and investors are paid, to the extent possible. In Chapter 7 cases, for example, the trustee will sell all of the company's assets and keep paying creditors until that money runs dry. In Chapter 11 cases, the business gets to keep some of its assets. All debts are wiped away at the end of the process under either chapter, regardless of whether a creditor actually gets paid [source: SEC].

Federal bankruptcy law provides a general hierarchy of debt holders that serves as a road map of sorts for determining order of payment. Secured creditors – those whose loans are backed by collateral, such as a house or building – get paid first. That is, after money is put aside for legal fees and other costs related to the bankruptcy proceeding, of course. A bank that holds the mortgage on a bankrupt company's business headquarters, for example, will likely take the property. If that's not enough to cover what's owed, the bank gets the first shot at any other money generated when other assets are liquidated [source: Fullerton].

Unsecured creditors are next to be paid, if there's any money left. This group includes people and businesses that hold debts that aren't secured by property. That means credit card companies as well as suppliers and service providers who haven't been paid for their work, among others [sources: SEC, Fullerton].

Investors in a bankrupt company reside at the bottom of the totem pole for payment purposes. As those who lost money in the stock market during the recent recession might already know, investors take on quite a bit of risk when they buy a piece of ownership in a business. Bondholders, who are offered a specific rate of return in exchange for investing in a company, are paid ahead of other investors. Shareholders are last in line, where they're generally unlikely to get much of their money back [sources: SEC, Fullerton]. 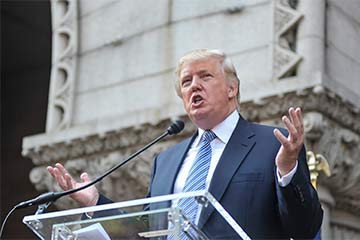 If you've read this far, you may be slightly confused. So, our man The Donald gets to load up his gaudy luxury properties with all kinds of unreasonable and unnecessary debt, wait until that debt outweighs his business's assets and then skulk away through the bankruptcy process, leaving investors and creditors clutching their wallets as they go down with the ship? In a word: yes.

The laws were tweaked largely to address a growing wave of personal bankruptcies, including many fueled by crippling personal credit card debt. Among other changes, people who file for Chapter 7 bankruptcy now have to meet a so-called "means test" in order to be eligible. If the person's income is above the average level in his or her state and the person can make minimal payments to creditors, the debtor can't seek Chapter 7 protection. The new law also looks to combat serial filers and requires all individual filers to show that they've attempted to obtain credit counseling [source: DeLaurell].

For businesses, the changes were relatively minor and aimed at protecting creditors. They include extending the time period in which creditors can try to get back the stuff that they've already shipped to bankrupt customers, while limiting a trustee's ability to recoup money paid to a creditor in the weeks before a business files for bankruptcy. The idea is that this will give creditors an incentive to extend loans or other credit to businesses that are in danger of going under and potentially keep these companies out of bankruptcy court [source: DeLaurell].

Yes, Donald, there is a Santa Claus. His name is Uncle Sam.

Count me among the apparently small group of people who are sad to see the Trump Atlantic City properties go. The Trump Plaza closed its doors on the New Jersey boardwalk earlier this month and it appears that The Trump Taj Mahal is also on its way out as a result of similar financial difficulties. As a gambler, that means less of an opportunity to try to grab old man Trump's cash. The Donald hasn't been involved in those casinos for quite some time now, but his name and face are plastered all over the joints. Winning money at the blackjack table is always fun. Winning money "from" Donald Trump is extra special.