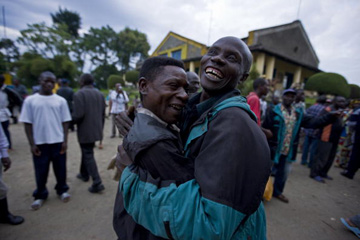 Rangers from the Congolese Wildlife Authority return to Rumangabo in North Kivu in 2008, an area that was under the control of the Tutsi rebel group CNDP.
Brent Stirton/Getty Images

In 2001, Kabila was the victim of an assassination. His son, Joseph Kabila, became president. The younger Kabila sought to end unrest in the DRC. He welcomed soldiers from the United Nations into the DRC to help quell the violence. Over the next few years, the DRC's neighboring nations withdrew their troops officially. Some troops remained behind, forming splinter groups within the DRC.

Even as the DRC created a stable government, complete with truly free elections, these splinter groups began to terrorize the eastern DRC. Among the active groups were the Democratic Forces for the Liberation of Rwanda (FDLR), a Rwandan Hutu rebel group and a militia dominated by Tutsis called the National Congress for the Defense of the People (CNDP). Clashes between the two groups and the DRC's official military created a chaotic environment.

Over time, the DRC government managed to expel or absorb many of the rebel groups. Several have transformed into political parties within the DRC. But smaller militias still fight for control of the eastern regions of the DRC, particularly in North and South Kivu, provinces that border Lake Kivu. The eastern region is now the domain of various Mai-Mai, which are community-based militias. While a few politically motivated armed groups are still active in the area, much of the current violence takes place between bands of fighters who have no distinct political aim.

To fund their efforts and to purchase weapons, the armed groups rely heavily on exploiting the natural resources of the DRC. Their main focus is the DRC's mining industry. These groups use force in the form of rape and other violent acts to suppress the local populations and force them into labor in the mines. Meanwhile, they fight one another -- and the DRC military -- for control of territory and smuggling routes.