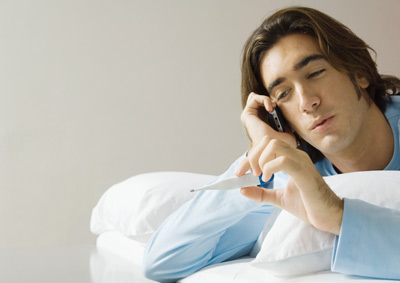 I have a fever and the only prescription is more cowbell.
PhotoAlto/Odilon Dimier/Getty Images

It's a rainy Monday morning, and you've woken up with a tickle in your throat. You feel like an elephant is sitting on your chest, and every fiber of your body revolts against the idea of getting up and going to work. What do you do? Do you tough it out and head for the shower, knowing that you may not get much done but at least your boss will see a warm body in your cube? Or do you roll over, reach for the phone and call the big guy? When your boss answers, you moan, "I can't come to work today. I live in Sweden."

Now, your boss may not accept geographic location as a legitimate excuse for missing work. After all, companies may be particularly concerned about "sick days" taken by employees located near golf courses, ski slopes or beaches; about 40 percent of workers surveyed in 2007 admitted to taking a sick day to goof off [source: Schweitzer]. After calling in with a case of the sniffles, workers use the extra day to convert a two-day weekend into a three-day holiday, hitting the nearby mall, lake or amusement park.

­But the amount of sick days taken in some places extends far beyond workers in sunny climes calling in "sick" to take advantage of the great weather. In Germany, for example, 18 percent of workers reported taking a sick day in a one-year period, while only 8 percent of workers in Ireland called out [source: Gimeno et al]. The­ amount of sick leave days that each worker takes in a year differs wildly from country to country, indicating that geographic location does seem to have some bearing on whether or not you're going to call in sick to work.

But why is geographic location a factor? Could some places be subject to more illness than others? Turn the page to find out why the average worker in Poland uses 26 sick days in a year and why workers in the United States take only five. 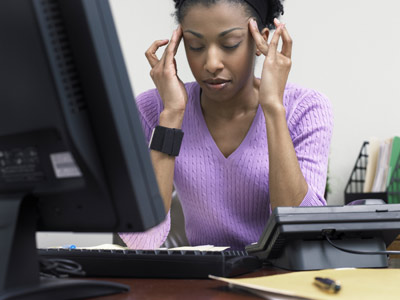 Workers without sick day benefits may not have the luxury of calling in sick.
Sean Justice/The Image Bank/Getty Images

When Forbes Magazine ranked the world's healthiest countries in 2008, Finland ranked third and Greece didn't crack the top 15 [source: Van Dusen, Ferrey]. Yet in a study that examined sick days taken by workers in the European Union, Greece had the lowest percentage of employees taking sick leave, at 6.7 percent, while Finland had the highest, with 24 percent of workers taking a sick day in the previous 12 months [source: Gimeno et al.].

How can a country be ranked third for health when so many workers are taking sick days? The study's authors were hesitant to attribute the discrepancy between the countries to one particular factor without further research, but they don't think it's because the Finns are sicker. The health of industrialized countries is roughly the same, or at the very least, it's certainly not different enough to account for the vast gap in sick days. So your geographic location doesn't affect whether or not you get sick, but it can affect whether you call in sick or whether you trudge off to work.

The study found that workers in Southern European countries, such as Greece, Portugal and Italy, took far fewer sick days than workers in Northern and Central European countries. In countries with high levels of sickness absence, workers had better benefits, so not only was it more likely they could take a sick day with full pay, it was more accepted by a workplace. In Spain, for example, workers tend to be employed by contract and may lose their job if they don't show up; Spanish employees had a sickness absence rate of 11.8 percent, the sixth-lowest percentage of the 15 countries ranked [source: Fuller].

There's some subtle psychology behind a worker's decision to call in to the office. Workers have to weigh weigh the costs and benefits to calling in sick. They may consider issues such as these:

These factors, collectively, are identified as "the measure of generosity of granting sick leave" [source: Osterkamp, Rohn]. Simply put, workers will happily accept this generosity when it's offered.

When that generosity isn't offered, workers are more likely to come to work sick. The United States doesn't guarantee paid sick days, whereas at least 145 other countries do [source: Heymann et al.]. As a result, another study that examined sick days in industrialized countries beyond just the European Union found that workers in the United States had the fewest sick days per employee per year, with five, while Poland had the most, with 26 days per employee per year [source: Osterkamp, Rohn].

When obstacles are introduced in locations that provide abundant sick leave, sickness absences fall as the measure of generosity does. In 1993, the Swedish benefit system was modified to include a "qualifying day," or a day with no pay before sick leave benefits kicked in. Researchers found that the number of sick days went down, but the average time people were absent increased [source: Voss et al.].

Still, finding some sort of balance would be ideal. In the United States, sick workers on the job cost more in lost productivity and health costs than absent workers do [source: Mason]. In contrast, sick days placed a burden of 4.2 billion euros ($5.2 billion dollars) on the Swedish economy in 2002 [source: Fuller]. Until that balance is found, stay in good health by reading some of the stories on the next page.