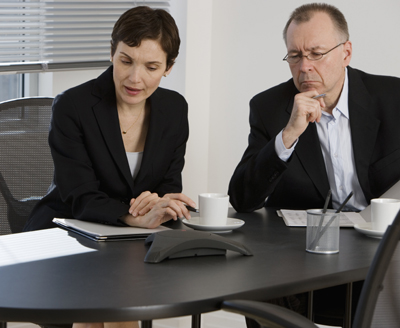 When participating in a teleconference, it's important to be prepared.
Tetra Images/Getty Images

Mark is struggling with unfamiliar audio controls as conference coordinator and cuts off Sylvia's comment, disconnecting her. He's not sure where Bill is -- he should have been a participant, but he hasn't checked in. Joe and Paul insist on participating from a speakerphone and clip off parts of the conversation every time they talk. Melissa calls in from London but has to leave early because her cell phone needs to be recharged. Kelly and Maria sound so much alike that it's impossible to tell who's talking.

Jack has to take an important call and puts the conference on hold, leaving a background of elevator music for everyone else. From the clicking sound and her vague responses, Anna is reading and answering her e-mail while teleconferencing. And as usual, Emily keeps interrupting everyone's comments, while Robert wants to direct the discussion to his pet topic of improving office technology.

To a large extent, teleconferencing etiquette is simply politeness -- waiting your turn and treating everyone respectfully with patience and tact. But the technology and format of teleconferencing create the need for etiquette rules that go beyond what's expected in a conversation between two or three people in the same room.

Things to Consider Before a Teleconference Call 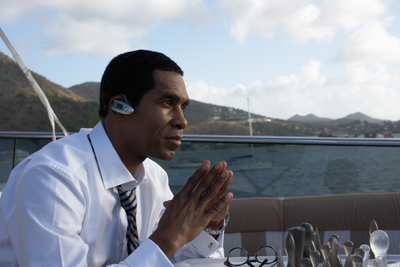 Teleconferencing is better when conducted from a landline telephone or a quiet location, not from your yacht.
Getty Images

Teleconference etiquette starts before anyone picks up a phone. By planning ahead, both the teleconference leader, or host, and its participants can make teleconferencing a more polite and pleasant experience.

Some breaches in teleconferencing etiquette are simply the result of boredom and frustration. Participants kept longer than expected or trapped in discussions of side issues are likely to become disinterested and impatient.

As the host, you can short-circuit those reactions by planning the meeting carefully.

Handling the arrangements carefully will also help make the teleconference run smoothly with no one missing or arriving late.

Don't let technology contribute to etiquette problems, as can happen if a participant is cut off mid-comment.

If you are a teleconference participant, be pro-active about closing out extraneous noise, reducing interruptions and preparing to take an active part in discussions.

No matter how you plan, teleconferencing etiquette doesn't stop when the meeting starts. Keep reading to find out what you should avoid, as a host or a participant, so that your teleconference runs smoothly and politely. 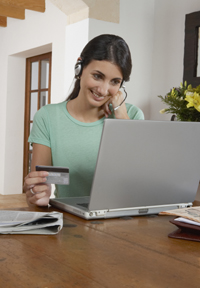 For lots more information about teleconference etiquette and related topics, check out the links on the next page.

10 Networking Tips for People Who Hate Networking
10 Worst Business Decisions Ever Made
Will learning a language help me professionally?