What are some effective communication tools for keeping employees in touch with the office? 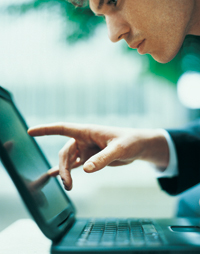 Photo courtesy Save On Conferences

In 2004, about 44 million American employees did at least some portion of their work from home [ref]. As the number of remote workers has increased, employers have reported improved morale, increased productivity and a reduction in missed work due to illness. But keeping remote employees in touch with the rest of the office can present a few challenges.

A lot of people use e-mail as their primary method for communicating with co-workers. Sending e-mail is fast and easy, and people who spend a lot of time at a computer can send messages with without disrupting to their work. But email lacks several of the signals that people use to communicate effectively, like facial expressions, tone of voice and body language. Its efficiency and impersonal nature can also lead people to say things via email that they might not say in person or on the phone.

For these reasons, experts often suggest that people who work from home rely more on the telephone than on e-mail. People can get to know their coworkers better by phone, and tone of voice and other vocal cues also make the telephone a more effective form of communication. Conference calls are also a good tool for group discussions, planning and general meetings.

Web conferencing keeps remote employees in touch with the office through both audio and visual means. A variety of web conferencing software and services are currently on the market, and their features vary considerably. In general, companies can purchase software and host meetings themselves, or they can use a hosting service. Using a web conferencing program, employers can create virtual rooms in which to conduct real-time training, brainstorming sessions and other meetings.

For more information about telework and web conferencing, check out How Teleconferencing Works.