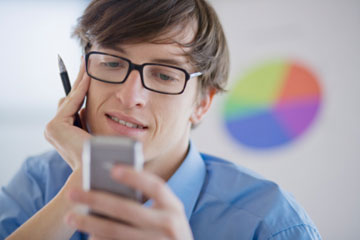 Meet Diane. She's a classic multitasker, zipping through the grocery store, steering her wire basket with one hand while she clutches her iPhone with the other. She's nailing down details for the church fundraiser, which she instantly tweets into cyberspace as she slips her credit card through the self-checkout machine. Minutes later, idling in her car, she's on her laptop skyping her sister in London while texting her husband in Vermont. By the time Diane gets home and discovers she's forgotten the eggs, she'll have tweeted, Facebooked, IM'd, texted and e-mailed a dozen more times. Exasperated, she swears that next time she's leaving her smart phone at home.

People have been forgetting items at the market since before Morse code; one can't necessarily blame technology for lapses in focus. But communication tools like cell phones, e-mail, instant messaging (IM), video conferencing and social networking have revolutionized the way we interact with each other. Just as one example, in June 2009, scores of election protestors in Iran sidestepped government censorship by using Twitter to communicate with the world [source: NPR]. Though the story dominated news cycles for days, one could argue that Paul Revere's midnight ride, warning colonists that the British were coming, was just as effective. After all, in both instances, the message came through loud and clear.

Nevertheless, the communication tools of yore -- cups on a string, war drums and even the old-fashioned love letter -- are relics. Today's society uses smart phones, e-mail, social networking, texting, IM, online shared access software and video conferencing to interact. Whether these tools increase or decrease productivity is a matter of intense debate. Beleaguered managers, chafed when they catch employees frittering away time on Facebook, tend to believe too many communication tools can decrease productivity. Others, thrilled to be able to meet far-flung clients face-to-face through video conferencing, would argue that communication tools vastly improve productivity. Studies support both arguments. We'll dig into that data on the next page.

A Bad Workman Blames His Tools

In 1993, Erik Brynjolfsson of MIT published a study called the "Productivity Paradox" in which he concluded that advances in information technology did not necessarily lead to an increase in productivity [source: Brynjolfsson]. Subsequent studies suggest that new communications technologies create distractions that may actually decrease productivity. One particularly sensational study of 1,100 Britons concluded that participants lost an average of 10 IQ points -- more than double the IQ drop for people smoking marijuana -- when they tried to juggle work and e-mail [source: CNN]. Another study by Nucleus Research, an IT research company, concluded that companies that allow Facebook in the workplace lose an average of 1.5 percent in total productivity [source: Nucleus].

On the other hand, the Internet was all abuzz in early 2009 with the news of an Australian study that concluded workers were an average of 9 percent more productive if allowed moderate personal use of the Internet [source: Melbourne University]. Furthermore, productivity in the business sector has steadily increased in recent years, according to the fourth quarter 2009 Bureau of Labor Statistics "Productivity and Costs" report [source: BLS].

Companies often list multitasking as a preferred skill for potential employees. But does multitasking really mean higher productivity? Stanford University professor Clifford Nass, who conducted research on multitasking, said, "People who multitask very, very frequently believe they are excellent at it and they're actually, as far as we can tell, the worst at it of any people" [source: NPR]. Nass and his partners studied three competencies: the ability to ignore irrelevant information, the ability to keep working memory organized and the ability to switch from one task to another. Multitaskers performed dismally in all three categories [source: NPR]. Their cell phones and computers, however, worked just fine.

And that brings us to the old English proverb: "A bad workman blames his tools." Like Morse code, the telephone and the fax machine, today's communication tools can and do enable us to get in touch with each other in speedy and novel ways. They certainly have the potential to increase productivity. However, as Diane, our egg-forgetting multitasker, illustrates, they also create distractions. It's up to us to manage those distractions and use our technology productively.

Now, if you could stop what you're doing and tweet this article, that would be great.