Where Blood Diamonds are Re-emerging 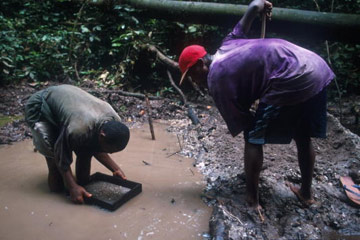 Critics of the Kimberley Process cite recent crises in Zimbabwe, Venezuela and Lebanon -- and the slow reaction of KPCS leadership -- as evidence of flaws in its regulatory system.

In February 2006, a British mining company bought the mining rights in Zimbabwe's Marange district. Later that year, however, the Zimbabwean government broke their contract with the mining company and evicted them from the site.

After the eviction, tens of thousands of local villagers grabbed shovels and sieves to mine the Marange site illegally [source: PAC]. They sold their diamonds to black-market dealers who smuggled them out of the country. Eventually, the Zimbabwean government, led by the President Robert Mugabe, decided that it wanted a cut of the Marange profits [source: Evans].

In 2007, the government used the military and private security forces to militarize the Marange site and guard it against illegal mining. In October 2008, things turned bloody. According to reports from hundreds of witnesses, police forces chased illegal miners into a sniper ambush with a military helicopter, which killed dozens of the unarmed men.

Since then, reports of additional helicopter attacks, mass graves and piles of bodies being dumped at local hospitals have surfaced [source: PAC]. An estimated 200 miners have been killed, while other local villagers -- including schoolchildren -- have been forced to work the mines for little or no pay [source: Evans].

Meanwhile, NGO reports and media accounts estimate that Venezuela is still producing 200,000 carats of rough diamonds every year [source: Global Witness]. These unregulated diamonds are being smuggled to market through neighboring countries like Brazil and Guyana -- both KPCS members.

Lebanon and Guinea are the latest countries to rouse suspicion. Lebanon -- which was dropped from the KPCS in 2004 and reinstated in 2007 -- is exporting $50 million in diamonds annually, many more than it has the capacity to produce internally [source: PAC]. One explanation, proposed by the publication Diamond Intelligence Briefs, is an active diamond-laundering route between the two countries. Guinea's own government has acknowledged widespread corruption in the diamond industry [source: IRIN].

How is the KPCS addressing these alleged violations? Have the governments in charge been sanctioned or removed from the coalition? Read more on the next page.