A Day in the Astrobiology "Lab" 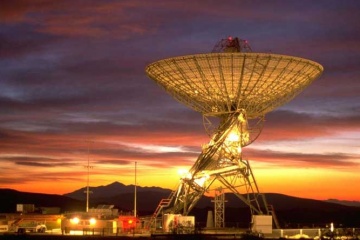 If you become an astrobiologist, you might become interested in searching for signals from distant stars and galaxies with a radio telescope. This one is located at the Lewis Center for Educational Research in California.
Image courtesy NASA/JPL

Most astrobiologists work either for NASA or an academic institution, though private foundations support some astrobiology positions as well [sources: Lubick, Vault]. But regardless of affiliation, astrobiology is a small world in which most organizations and teams are ultimately tied together, whether by funding sources, collaborative efforts and/or organizations like the NASA Astrobiology Institute (NAI). The institute is a web connecting astrobiology research around the globe through partner institutions and individual member teams [source: NASA]. One of those teams, from Arizona State University, studies elements that are the most basic building blocks of life on Earth, including carbon, nitrogen, phosphorus and iron, and the relationship between the availability of those elements and water. Using what they learn, the Arizona team will develop computer models that could help predict whether a given solar system is likely to contain a habitable planet [source: NASA].

Through the Mars Institute, scientists on the Haughton-Mars Project have established base camps in the High Arctic, on the uninhabited Devon Island. They test exploration methods in the extreme "polar desert," an environment determined to be similar to the makeup of Mars [source: Mars on Earth].

Not all astrobiology work is quite so extreme. SETI astronomer Dan Werthimer has spent decades analyzing data from massive radio telescopes, looking for signals from beyond Earth (much like Jill Tarter, director of the Center for SETI Research, on whom Carl Sagan based the main character in the 1997 movie "Contact") [source: Exploratorium]. So far, he's found nothing – but as he told Congress in 2014: "It may be only a few years before we have detected evidence of life beyond the Earth."

Werthimer also founded the SETI@Home system that lets computer owners contribute their processing power to the massive task of combing through those telescopes' data [source: SETI@Home].

Astrobiology research is happening all over the world, but it's not the easiest field to break into. The career path is often uncertain and varies widely. One thing, though, is nearly universal: An astrobiology career begins in a different scientific discipline.

As a relatively small, new field, it's tough to find definitive salary ranges for astrobiology jobs. Using California as the location (that's where the NAI has its headquarters), the salary-comparison website Vault.com estimates astrobiologists earn anywhere from $25,000 to $100,000-plus per year, depending on experience. BiologySalary says $50,000 to $110,000, with an average of about $60,000 to $95,000. CareerBuilder has $90,000 as the average. Not too bad.