by Chris Opfer
Prev NEXT
2 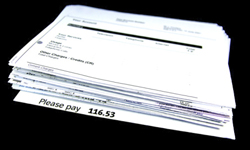 If there's a silver lining to the financial crisis that hit the United States in the early part of the 21st century, it's that Americans started getting serious about paying off debt. The Federal Reserve Bank of New York reported in August 2010 that households were paying off more debt and taking on fewer loans [source: Federal Reserve Bank of New York]. Yet the sins of our free-spending past continue to haunt many a newly converted penny-pincher, generally in the form of sagging credit scores. Bad credit doesn't just mean an unsightly score; it can prevent people from getting a new or refinanced mortgage under the strict standards imposed following the housing bubble burst.

One result of all this scrimping, saving and score watching is that it has spawned a new scam for con artists looking to make a quick buck off America's newfound thriftiness. Credit-repair scammers promise clients that they can boost credit scores dramatically and quickly, usually without explaining their methods. In September, the FTC settled a lawsuit against credit repair schemers in Miami who promised to make records of late payments, collection accounts and bankruptcies simply disappear from credit reports [Source: FTC]. While a credit-repair company may be able to assist in getting erroneous information removed from a client's credit report, the truth is that facts about debts, missed payments and the like will remain on your credit report for roughly seven years.