by Chris Opfer
Prev NEXT
3 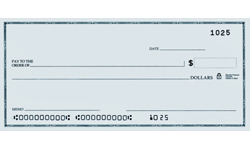 Scammers will send their victims a fake check for expenses and have them wire back a portion -- and by the time the check is revealed to be fake, it's too late.
iStockphoto/Thinkstock

It was all the way back in 1985 when British rockers Dire Straits took aim at people who expect "money for nothing." Now scammers are following their lead.

In fake-check scams, swindlers reel in victims with phony mystery-shopper jobs or the aforementioned sweepstakes routine. They usually mail a realistic-looking check -- expenses for the mystery-shopper gig or supposed lottery winnings -- to the target and request that he or she deposit it and wire a portion of the proceeds back to the scammer. The bank eventually realizes that the check is a fake and removes the amount from the victim's account, likely after the scammer has received his funds.

Allison Southwick of the Better Business Bureau says that people can avoid fake-check scams by following one simple rule: "Never wire money to someone you don't know."