by Chris Opfer
Prev NEXT
8 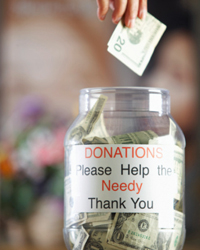 It's never a bad idea to vet charities before making a donation, to ensure that the organization is legit.
Brand X Pictures/Thinkstock

Donation scams are nothing new, but for those duped by swindlers posing as the Little Sisters of the Poor or a similar fictitious organization, the ripoff stings even more during a recession.

Spammers often perpetrate the hoax via e-mail or phone, claiming that their sham organization provides aid to a laundry list of beneficiaries from battered women to returning military troops. Sometimes they direct people to an apparently legitimate Web site that either references or sounds similar to well-known charitable organizations and states where donations can be made to the cause du jour.

The strongest weapon in combating charity fraud is research. Before giving, donors should obtain the charity's full name, address and phone number, as well as written information about how the money raised will be used. Charities are required to register in most states and officials often track the percentage of donations that actually go to the needy rather than organizational overhead and fundraising. The National Association of State Charity Officials provides contact information for officials that regulate charitable organizations and charitable solicitations in each state on its Web site, nasconet.org.