by Chris Opfer
Prev NEXT
10 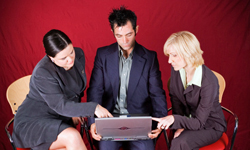 Many out-of-work businesspeople are searching the Internet for jobs, but be on the lookout for false promises of job placement.
iStockphoto/Thinkstock

According to the U.S. Bureau of Labor Statistics, in October 2011, 9.1 percent of Americans were unemployed [source: Bureau of Labor Statistics]. That means a lot of people were looking for jobs. The previous February, the Federal Trade Commission launched "Operation Bottom Dollar," a crackdown on staffing scams that prey on job seekers, promising to find them work in exchange for an upfront fee. The FTC warns that these scammers often misrepresent their services or promote outdated or fictitious job offerings. Once they get their hands on large application fees and personal banking information (for "payroll" purposes), the scammers -- and the jobs -- disappear.

From government careers to modeling and movie extra gigs and even Gulf oil-spill cleanup work, bogus jobs are often listed on legitimate career Web sites and in newspaper classifieds. Schemers are even dipping their toes into international affairs. Under the guise of official sounding names like, "U.S. Committee for U.N.," "United Nations Center for Development Initiative" and "United Nations Global Military Intelligence," a new scam reels in unwitting job seekers with the promise of a career with the United Nations. These organizations aren't affiliated with the United Nations and have no means of landing people jobs [source: United Nations].

As in many scams, an upfront fee is a tipoff of likely fraud. The U.S. Federal Trade Commission advises that job seekers should "be skeptical of any employment-service firm that charges first, even if it guarantees refunds" and "reject any company that promises to get you a job [source: FTC]."