by Linda C. Brinson
Prev NEXT
1 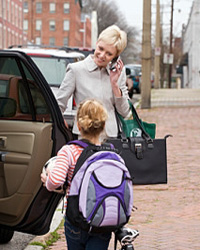 Working parents balance the stresses of work and home every day. How do they do it?
Ariel Skelley/Getty Images

Here's a job that doesn't show up on many "most stressful jobs" lists. Why? Unfortunately, it often isn't considered a real job. But few things can be more stressful than having a job outside the home, and then coming home to the demanding job of being a parent.

We most often think of working mothers as having high stress levels, but the same is true for any single parent of either gender, and for working fathers who share primary responsibility for raising their children.

The stress arises largely from being pulled in so many, often contradictory, directions. If parents deal with a child's problems -- illness, trouble at school, emotional problems, whatever -- at work, they may worry about neglecting deadlines. If they don't deal with the children's problems immediately, parents are going to feel guilty.

What if there's a big day coming up at work, but your child wakes up feeling ill? What if it snows, and school is delayed or canceled? What if you're supposed to stay late for some important professional reason, but you can't find a babysitter? And what about conflicts that aren't even crises, such as choosing between a business meeting and a child's ballgame? Focusing too much on your child might hurt your career, and vice versa. How do you choose wisely?

Many parents are also teachers, soldiers, doctors, police officers or any of the other stressful jobs on this list. Imagine that.