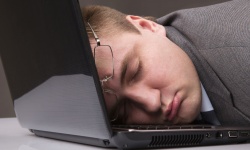 If you have trouble sticking to the 9-to-5 routine, there are other options.
© Nomadsoul1/iStock/Thinkstock

As many as one-third of American workers have dozed off while on the clock [source: Adams]. Think about that: That's one out of three people too sleep deprived to do anything but nap while at work.

And, bigger picture, about 10 percent of us admit our sleep deprivation makes it difficult to concentrate and that we just can't keep up when it comes to our overall productivity [source: National Sleep Foundation].

It's easy to blame our inability to fall asleep – or stay asleep – on the stress and demands of a modern lifestyle, but it turns out that insomnia is not a modern-day phenomenon (although our always-on lifestyles aren't helping).

Insomnia isn't what happens when you nap too long in the afternoon and can't manage to get to sleep at your normal bedtime that night; that's just poor planning. The brains of insomniacs, it turns out, are more excitable than brains of those with normal sleep patterns. And humans have been suffering with the condition since at least the times of ancient Egypt (and, likely, deeper into human history than that). Opium cures for insomniacs are described in ancient Egyptian documents, and insomnia itself is referred to as "to be in bed and sleep not," one of the "three living hells" described on an Egyptian hieroglyph [sources: Parker-Pope, Todman]. While we don't know how prevalent sleep disorders were among the ancients, we do know how pervasive the problem is today. Almost half of Americans suffer from occasional insomnia; about one-third suffer enough from sleep deprivation to gripe about how tired they are; and almost a quarter suffer from more chronic, frequent insomnia symptoms [sources: National Sleep Foundation, Parker-Pope].

Perhaps not all of us are using our sleep habits to our advantage: About 41 percent of us consider ourselves more productive at night, yet only about 3 percent of the American workforce is made up of night owls [sources: Zupek, Bierma]. Creatures of the night, we can do better. Consider how much better the smell of bread dough rising in the moonlight is compared to another sleepless night staring at the moon from your bed. 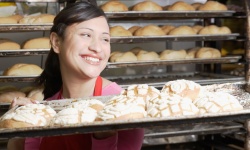 You could be enjoying the smell of fresh-baked goodies while most other people are dozing.
© Jack Hollingsworth/Digital Vision/Thinkstock

As it turns out, "time to make the doughnuts" is sometime before the sun rises, and bakers may begin their day as early as 2 a.m. or work an overnight shift to ensure baked goods hit the shelves before the rest of us wake up with cinnamon rolls on the brain.

When you stop in for a pastry on your way to work, still bleary-eyed from your morning alarm, the person who made that doughnut, cinnamon roll or croissant has been up for hours already. More than 13 million people work in the restaurant industry in the U.S.; about 166,000 are bakers, and Americans spend more than $3 billion buying their baked goods just at supermarkets alone [source: CFNC].

Online gaming community managers are most often gamers themselves and share that common interest with the gamers in the community they manage. This is a 24-hour business. The global gaming industry grew 9 percent in 2013. As many as 73 percent of gamers don't speak English – and online community managers are needed around the clock to assist players all over the world [source: Driver].

CMs aren't marketers or developers; they function as a bridge between the consumers who play a franchise and the tech team behind it. They moderate forums and user-generated content and are engaged within the community. Consider online gaming community managers as brand ambassadors, experts in brand-to-consumer communication with the aim of creating gamer loyalty – and good word of mouth about a franchise or studio. They also identify trends and share community insights, such as game improvements or problems. Of course, they need to have excellent communication and social media skills. 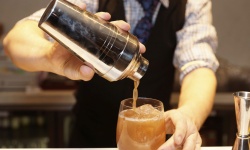 According to urban legend, Ben Franklin once said something about how beer is proof that God loves us and wants us to be happy. That quote attribution may be a myth, but it does point to one of the reasons we like our bartenders – they pour us our favorite poison. They also listen to our stories, jokes and, frankly, probably more of our malarkey than our therapists do.

Bartenders talk to more people than they'll ever remember, an interesting perk if you don't mind chatting with strangers and meeting new (possibly drunk, or at least tipsy) people. They work in restaurants, clubs and bars, which generally means a late-night lifestyle. Bartenders are on the job when everyone else is off the clock and looking for a good time. Depending upon the state, last call for alcohol may not be until 1 a.m. or later into the morning – last call in bars in some cities and states isn't until 4 or 5 a.m., and in Nevada it's a 24/7 job [source: Socially Responsible Drinking].

Game dealers may work a variety of tables, from poker or blackjack to craps or baccarat, and are responsible for almost half of the nearly $95 billion annual gaming revenue in just the U.S. alone [source: Casino City Press].

Most casinos will train their own game table dealers, so working in the pits may be slightly different from venue to venue, but one thing is for certain: Gambling is a 24-hour, seven-days-a-week business in casinos (and on cruise ships) around the world. Daytime shifts (especially early morning hours) aren't usually as busy as night shifts at the gaming tables. 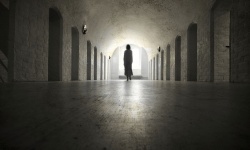 If late hours and the possibility of have ghostly work associates sounds good to you, it might be worth looking into paranormal investigation.
©AnkiHoglund/iStock/Thinkstock

Do you believe in UFOs, astral projections, mental telepathy, ESP, clairvoyance, spirit photography, telekinetic movement, full-trance mediums, the Loch Ness monster and the theory of Atlantis? While that's not list of job qualifications, you do need an open mind to be a paranormal investigator. Ghost hunters investigate spirit activity (both friendly and not-so-friendly hauntings) and conduct field research by photographing possible sightings or paranormal activity. They also identify electromagnetic fields in the vicinity, measure solar flare activity and static charge, and record temperature and electronic voice phenomena.

Paranormal investigators primarily work at night – after all, isn't that when things "go bump"?

In just a single year, it's estimated that global cybercrime costs $113 billion and affects the lives of more than 375 million victims [sources: Martinez, The Economist]. Consider the massive scale of recent data breaches. For instance, in 2014 Home Depot announced 56 million customer accounts had been breached. Seventy-six million consumers and 7 million small business accounts were affected by a breach at JP Morgan Chase that same year [sources: Winter, Vinton].

If you think all hackers do is exploit vulnerabilities, well, you're right. However, not every hacker is committing a crime. Here's the difference: Black hat hackers don't have permission, whereas white hat hackers do. Known as "pentesters" (penetration testers), white hat hackers are hired by companies to find and sometimes fix security flaws. PayPal, for example, reports the company has compensated roughly 1,000 of the good guys for reporting security risks. Those 1,000 pentesters were scattered across more than 66 countries and a variety of professional backgrounds [source: Shahani]. 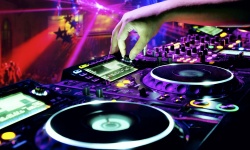 When an earthquake-stricken Japan was hit with a nuclear reactor meltdown in 2011, night traders went into action to dump stock in the company that made the reactor (General Electric) before the day traders were even out of bed [source: Lambert].

Back in 1999, the Securities and Exchange Commission (SEC) allowed investors to trade stocks outside of the regular 9:30 a.m. to 4 p.m. Eastern Standard Time (EST) stock market hours, and a new type of trader was born: the night trader. Off-hours trading takes place pre-market (from 8 a.m. to 9:30 a.m. EST) and after-hours (4 p.m. to 6:30 p.m. EST). And then there are people trading on the foreign exchange market (forex) at all hours. If hot earnings releases, foreign-exchange trading and making a profit off of real-time news events is important to you, maybe it's time to expand beyond day trading.

Professional DJs spin music – both what's hot and what they think you should be listening to – for a living, whether it's live at a club, social event or private party; recorded for a podcast; or delivered streaming or old-school style on the radio. And while some radio DJs may work a day shift, you'll find many playing and mixing records for tranced-out rave bunnies all night long.

Naturally, DJs should love music, but it's not just about playing the newest singles; it's also about engaging a late-night crowd. Depending on the type of gig, technical know-how is also a requirement, sometimes for more than just musical equipment. Club DJs, for instance, sometimes choreograph visual effects to enhance their audio show.

More Jobs That Rule the Night 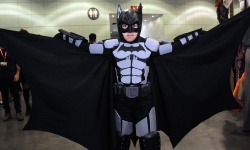 Doesn’t EVERYONE want to be Batman?
© Albert L. Ortega/Getty Images

You may think of a roadie as someone who maintains band equipment, packing it up, setting it up and tearing it down as needed. While they definitely do that, there are actually a few different flavors of what roadies do at stage shows. Some work as production managers; some are front-of-house mixers. There are monitor techs and instrument techs, lighting directors, riggers, bus and truck drivers, and tour merchandisers. But what they all have in common is that they all make concerts happen, most often working evening hours and late into the night. And let's not even talk about what happens in the wee hours of the morning on those tour buses.

They say you should dress for the job you want, not the job you have. If that's the case, break out your cape, utility belt and, of course, a mask to conceal your real identity. Why not aspire to spend your nights as Batman? After all, he doesn't have any unattainable superhuman powers like invisibility or flying.

Batman relies on his physical prowess and his gadgets to keep his city safe: Weapons training, martial arts, strength and weight training are all important (hopefully without the seven years in a Bhutanese prison). Also vital are forensic skills, chemistry, a way to bankroll all that tech — the list goes on and on. While working the Batman gig is probably going to be pro bono, under the right circumstances it's estimated that a person with the right genetics could train for 15 to 18 years to attain the physical prowess of Batman and then spend about three years on the job (after all, 18 years of training really takes a toll on the body) [source: Koebler].

There are a lot of cool night jobs that could have been on this list if, perhaps, the list had been 20 or 50 or 100 rather than just 10, including a few more with a creative or entrepreneurial spirit. What about freelancers, for instance? Freelance writers, editors and designers are often able to work flexible hours, whether that means overnight or whenever the mood strikes. Photographers, too, find themselves called to the camera at all hours of the day (news doesn't stop when we're sleeping).