by Brion O'Connor
Prev NEXT
2 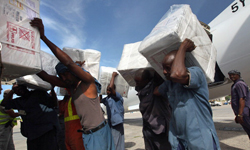 In Mogadishu, Somalia, on Aug. 15, 2011, UNICEF workers unload vaccines for children of families displaced from their homes by famine and drought.
John Moore/Getty Images

The most innocent are often the most vulnerable. Children often bear the brunt of disasters and war in disproportionate numbers. According to the group Save the Children, more than 8 million children perish every year before the age of 5 for reasons ranging from disease to malnutrition. And an estimated 358,000 women will die due to pregnancy or childbirth complications [source: Save the Children]. Just as alarming are reports indicating that although child mortality rates overall have declined worldwide, the life expectancy gap between the richest and poorest children continues to grow. Further, children -- some as young as 9 years old -- are often exploited during war, forcibly enlisted to fight for competing factions [source: Coalition to Stop the Use of Child Soldiers].

Fortunately, there are many relief organizations both home and abroad with the primary goal of helping those who are most helpless. In addition to the Connecticut-based Save the Children and the United Nations Children's Fund (UNICEF), other leading groups include Children's Hunger Relief Fund, ChildFund International, Children's Defense Fund and Childcare Worldwide. Many child-related organizations allow donors to "adopt" a child, giving them a more rewarding personal relationship with their beneficiaries. Others, such as Coalition to Stop the Use of Child Soldiers, look to end the practice of recruiting children to fight.