by Brion O'Connor
Prev NEXT
3

Earthquakes in Chile and Haiti 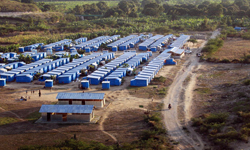 A year after the earthquake in Haiti, displaced people live in temporary shelters put up in Cabaret, Haiti, by Samaritan's Purse.
Joe Raedle/Getty Images

Mother Nature is not always benevolent, but this matriarch's dark side can highlight our good side. The catastrophic earthquakes in Chile and Haiti in early 2010 are a prime example. On February 27, Chile was devastated by one of the most powerful earthquakes on record, measuring 8.8 on the Richter Magnitude Scale. Leading the aid response were several well-established organizations, including AmeriCares, Oxfam America, Habitat for Humanity International and Doctors Without Borders.

In Haiti, the Jan. 12, 2010, earthquake claimed more than 222,570 victims and rendered 1.5 million people homeless. A year later, 810,000 people were still homeless [source: United Nations]. The American Red Cross and the International Organization for Migration partnered in a $7.5 million initiative to aid communities hosting residents displaced by the January 12 earthquake, with the goal of assisting 60,000 people [source: ReliefWeb].