by Brion O'Connor
Prev NEXT
4 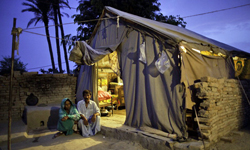 Allah Ditta and his wife Amna sit next to the temporary shelter at the site of their home in Muzaffargarh, Pakistan. The photo was taken in July 2011, a year after floods destroyed their house.
Daniel Berehulak/Getty Images

The death toll from massive flooding in Pakistan is relatively small -- estimated at between 1,300 to 1,600 -- when compared to the more than 70,000 killed in the country's 2005 earthquake [source: The New York Times]. Still, the sheer scale of the population affected by the Pakistan flooding -- estimated at 20 million -- "establishes an unfolding humanitarian crisis that demands a massive response from the international community" according to the Connecticut-based foundation AmeriCares.

Epic floods and the mind-boggling scope of devastation that comes with them have always prompted a strong philanthropic response. Following the carnage wrought by Hurricane Katrina, Americans gave $6.5 billion in aid. And when a giant tsunami crashed ashore in Southeast Asia on Dec. 26, 2004, American donors contributed $1.5 billion in relief funds [source: Charity Navigator]. In northwest Pakistan, where a swath the size of California is now underwater, the need is great, but the donations have been slow to materialize (roughly $102 million by the end of August 2010) [source: Reuters]. To make matters worse, Pakistan suffered flooding again in August and September 2011, killing more than 400 people [source: USAID]. The most pressing needs immediately after flooding such as this include food, clean water, medical supplies and shelter. AmeriCares, Mercy Corps, Action Against Hunger, Concern Worldwide and ActionAid International are among the groups spearheading the relief efforts.